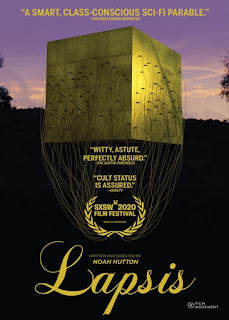 I’m not sure what the hell I just watched. For a sci-fi film, Lapsis is about as low-tech as it gets, mostly taking place in the woods with its characters camping in tents each night. During the day, their actions are often inexplicable. There’s a faceless antagonist - an all-powerful Big Brother-like corporation - but we’re never quite sure of their agenda. And in the end, we're left with more questions than the film chooses to answer.

Still, I liked Lapsis. A lot.

Maybe it’s because I could relate to the film’s protagonist, Ray (Dean Imperial). He’s an everyman who doesn’t entirely trust technology and resents the extent that The Quantum - the latest must-have computer network - has insinuated itself into all factions of society. I feel the same way about cell phones; the only reason I now own one is because society dictates I do (and I’ve had people make fun of me for hanging onto a landline for so long).

Since the Quantum network continuously requires endless amounts of cable, a side industry has evolved. One particular company (CABLR) offers the promise of quick riches to people willing to hike throughout various regions and connect miles of cable to giant metal cubes. However, “buying” into the business requires getting a personal medallion, which is expensive. But as a “cabler,” the more you connect, the more money you can earn.

Similar to a Ponzi scheme, nobody seems to know exactly what Quantum does or why being a cabler should be so lucrative, but most don’t appear to get wealthy because of the company’s rigid quota. Cablers must maintain a relentless pace, racing against slow-but-ceaseless robots to the next destination. If the robot beats you there, no payday. If you’re caught cheating - like trying to sabotage a robot - you forfeit your medallion.

Though he doesn’t want to, Ray finds himself forced to become a cabler, mainly because his younger brother suffers from a form of chronic fatigue called Omnia and needs treatment offered by a specialty clinic (which also appears to be a scam). But he’s older than other cablers and out of shape. Not only that, he buys a black market medallion which belonged to someone named Lapsis, who may have knowledge about Quantum a group of disgruntled cablers seek to exploit.

However, Lapsis mostly eschews the particulars of its labyrinthine plot to focus on the inherent absurdity of its premise. The act of cabling is a ridiculous task, especially since it utilizes decades-old technology. Eventually, we harbor the suspicion that cabling serves no purpose at all, and those sucked into doing it are generally treated pretty terribly.

The narrative begins to unravel near the end, mainly because it’s so loosely-knit to begin with. But until then, Lapsis is chock-full of satiric commentary, mostly about conformity and greed. Quantum could just as easily be Amazon, Nestle, Apple or the phone service I have the privilege of paying 200 bucks a month for...companies whose monopolizing business practices not-only go unquestioned by John Q. Public, we’re ultimately unable to avoid them. For a grassroots piece of budget-conscious sci-fi, Lapsis ends up being surprisingly perceptive.