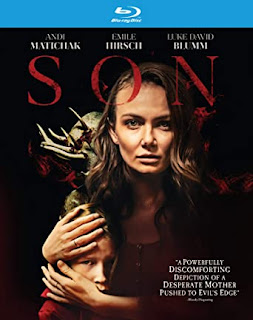 Almost from the get-go, we can kinda see where Son is heading.

The prologue has Laura (Andi Matichak) on-the-run and in labor, giving birth in her car after managing to lose her pursuers. She screams that she doesn’t want the child...at least until she finally sees him. If the moment brings-to-mind the final scene of Rosemary’s Baby, you aren’t alone. So even though she lovingly embraces the newborn, we already suspect there's something wrong with him.

Eight years later, her son, David (Luke David Blumm), appears to grow violently ill, shortly after their home is invaded by a creepy batch of folks who hover over him as he sleeps. He’s in constant pain and his skin is festering with open wounds. However, doctors can’t figure out what’s wrong with him. This is also when we learn Laura once escaped from a cult, whom she believes are now coming for David.

But David’s pain and complexion are staved by eating other people, which Laura horrifyingly discovers after he chows down on a family friend. She ends up on the run from both the mysterious cult and Paul (Emile Hirsch), a sympathetic cop and obligatory love-interest. He wants to believe her story, but the trail of eviscerated bodies makes that increasingly difficult.

The performances are decent and would-be thrillseekers will certainly enjoy a couple of gruesome death scenes. However, Son is partially undone by an overly-familiar plot which holds few surprises. There is, of course, a major late-inning plot twist which reveals this cult is even more widespread than Laura initially believed, but it feels like an obligatory red herring.

Son is occasionally atmospheric and efficiently constructed, but treads awfully familiar ground. That’s not necessarily a deal-breaker, especially in the horror genre. However, none of the characters are particularly interesting and the narrative lacks any real punch. Ultimately, it’s a movie destined to be forgotten shortly after watching.