THE LITTLE THINGS: Denzel to the Rescue 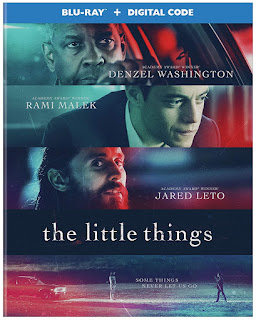 Thank God for Denzel Washington. Just how many movies has he saved during his career?

Looking back at his filmography, one might have to go all the way back to 1990’s Heart Condition to find one that was unequivocally terrible. But over the years, he's rescued scores of others from pure mediocrity simply because of his screen presence. The man needs a cape.

Case-in-point, The Little Things is a derivative thriller that owes more than a passing nod to Seven, with two cops tracking down a sadistic serial killer who tortures young women to death. For most of its running time, the film treads familiar ground. Washington plays Joe Deacon, a former detective now working as a small-town deputy. He returns to his old LA stomping grounds to collect a piece of evidence, but gets coerced into teaming-up with cocky young hotshot Jim Baxter (Rami Malek, in a surprisingly thankless role). Being older & wiser, Deacon becomes a mentor in more ways than one.

In a casting move that’ll surprise absolutely nobody, Jared Lero is primary suspect Albert Sparma, your standard-issue clever-but-crazy antagonist who toys with the detectives and clearly enjoys this cat & mouse game. As serial killers go, we’ve seen him in countless other movies and Leto approaches the role with the subtlety of a mallet.

Some willing suspension of disbelief is required at times, particularly during the second half. However, it’s also when we learn more about Deacon’s past and why he was essentially drummed out of town years earlier, an interesting bit of exposition that explains his motives for rescuing Baxter from a similar situation. Deacon’s internal conflict is easily the best aspect of the film, largely due to Washington’s stoic, empathetic performance.

Despite some tense moments, The Little Things mostly walks a familiar path and ends with more of a whimper than a bang. However, the effortless gravitas Denzel Washington brings to his character keeps the film from becoming completely rote. It’s worth checking out just for his performance.

“A CONTRAST IN STYLES” - Director John Lee Hancock, Denzel Washington, Rami Malek & Jared Lero discuss the characters and working with each other.