DELIVER US FROM EVIL Delivers the Action 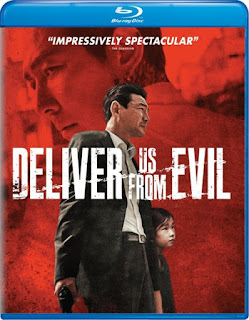 There are scores of action flicks with prologues created to establish a main protagonist’s “very particular set of skills” before moving on to the actual story. Deliver Us from Evil introduces Kim In-nam (Hwang Jung-min) as a ruthless, methodical hitman whose latest mark is supposed to be his last. But in this case, this sequence directly impacts what transpires later.

Concurrently, the daughter of an old acquaintance is abducted. For some reason, the narrative attempts to keep their relationship with Kim ambiguous, though it doesn’t exactly take a slide-rule to figure-out Yoo-min (Park So-yi) is his daughter. The trail leads him to Incheon, where she’s been sold to a crime lord who specializes in kidnapping children and selling their organs on the black market. With the help of streetwise trans cabaret performer Yui (Park Jeong-min), Kim employs his “very particular set of skills” to try and get her back.

However, complicating his search is Ray (LeeJung-jae), the sadistic, psychotic brother of the mob boss Kim killed in the prologue. Imagine Taken if Brian Mills was being relentlessly pursued by another guy with a “very particular set of skills” and you’ll have a good idea what to expect. Still, it’s an equally compelling - and far more violent - story with some terrific action. It takes awhile to get going, but once Kim hits Incheon, there’s a plethora of bone-breaking fights, explosive gunplay and one extraordinarily destructive car chase through a crowded marketplace. The action isn’t always plausible, but it’s certainly rousing, especially during the climax.

The film is bolstered by good performances and engaging characters. Jung-min reminds me of a ‘70s-era Charles Bronson (he sorta resembles ol’ Chuck, too) and Jung-jae makes Ray a wonderfully vicious villain. Elsewhere, Jeong-min manages to steal a few scenes while avoiding the trap of turning Yui into a mere caricature. Most importantly, writer-director Hong Won-chan utilizes his own “very particular set of skills” to turn his film into an exciting variation of the Taken formula. Despite the disturbing basic premise, Deliver Us from Evil is an entertaining, tension-filled slab of movie mayhem.

2 FEATURETTES - Your standard promotional ‘making-of’ and another that covers the various shooting locations.