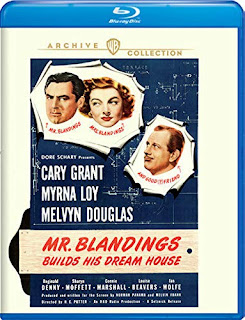 Mr. Blandings Builds His Dream House is one of those films with an idiot proof concept. Mining humor out of every homeowner’s greatest fears is sort-of like shooting fish in a barrel...simply turn every unexpected repair and expense into a worse-case scenario. Hell, the gags practically write themselves.

Which is why even the worst remakes or variations of the same theme - such as Are We There Yet? - manage to briefly resonate with anyone whose floor ever collapsed, or were slapped with $urprises by shady contractors who act as though everyone has a few thousand extra bucks tucked in their wallets. As someone whose furnace and water heater both crapped out less than a year after buying my own dream home, I can sure as hell relate.

But no film depicted a new homeowner’s plight quite like Mr. Blandings Builds His Dream House, partially because it was one of the first, but mainly due to good old fashioned star power. Few actors had the unique comic timing of Cary Grant. As the titular character, his reactions to each new predicament are perfect. And even though he’s sometimes his own worst enemy - stubbornly determined to finish the house, regardless of the personal cost - Blandings remains someone we empathize with.

Considering her own considerable comic gifts, Myrna Loy (as wife Muriel) seems underused, though she’s a congenial foil to James' misguided resolve...and occasional jealousy of family friend & lawyer Bill Cole (Melvyn Douglas). Speaking of which, Cole serves as not-only the film’s narrator, but the bemused, beleaguered observer of Blandings’ folly. As such, Douglas has some of the film’s funniest lines.

It’s how the characters respond & react that make Mr. Blandings Builds His Dream House work, not the catastrophes themselves, which is ultimately what raises it above the remakes and ripoffs that followed over the years. Neither self-consciously clever nor swimming in slapstick, it remains one of those simple pleasures you enjoy with a perpetual smile on your face. And even seven decades later, Mr. Blandings is someone a lot of us homeowners can relate to.

SCREEN DIRECTORS PLAYHOUSE BROADCAST - From 1950, with Grant and Betsy Drake. Runs about 30 minutes.