THEY WON'T BELIEVE ME: Robert Young's Dark Side 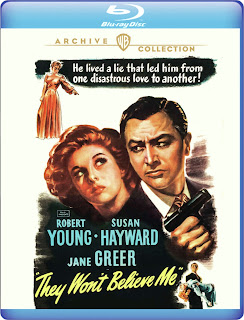 For most of my life, Robert Young was the dedicated, kindly doctor my folks used to visit on Marcus Welby M.D.. Before that, he was the dad everyone wished they had on Father Knows Best. I’d seen him in various other congenial roles in movies & TV over the years, but never paid much attention to his career.

But recently, I’ve discovered his dark side in such films as Crossfire, a classic piece of film noir where he plays a cynical, hard-nosed detective, and The Mortal Storm, which has him betraying friends & family to join the Nazi party. What's revelatory is how convincing he is in those roles...a far cry from dishing-out fatherly advice to Betty & Bud.

As Larry Ballentine in They Won’t Believe Me, Young is an absolute, irredeemable bastard...and he’s the protagonist!

When we meet Larry, he’s on trial for the murder of his lover, Verna (Susan Hayward), and takes the stand to tell his side of the story. He doesn’t sugarcoat it, either, freely acknowledging he married wife Greta (Rita Johnson) because she’s rich, while having an affair with her best friend, Janice (Jane Greer). Eventually, he plans to run away with Janice, but Greta intervenes by setting him up as a partner in a brokerage firm. Unable to resist the money, he unceremoniously dumps Janice moves to LA with his wife.

Soon after, Larry is seduced by one of the office secretaries, Verna, who freely admits being a gold-digger. However, they fall in love and decide to run away together. On the way to Reno, the two get into a fiery accident and Verna dies. Because she was burned beyond recognition, the police mistakenly believe the body is Greta, which Larry doesn’t refute. Since the crash was ruled an accident and everyone thinks Greta’s already dead, he figures he can return home and kill her without raising suspicion. However, he discovers her body at the bottom of a ravine, along with the note he left her. Larry dumps her into a nearby river and tries to put everything behind him, now rich and scot-free.

Then things get complicated when Larry's former partner starts inquiring about Verna's disappearance.

A terrific little piece of film noir, They Won’t Believe Me benefits from terrific plot complications and, of course, Young’s complex performance. Larry comes across as sympathetic during his testimony and outwardly charming while courting Verna. But he’s apathetic to the pain he causes others and almost remorseless over the death of these women. Yet we still get caught-up in his plight, even though we shouldn’t. After all, Larry may not have actually killed anyone, but he sure-as-hell was planning to.

Capping everything off with a deliciously ironic twist ending, They Won’t Believe Me is another vivid example of Robert Young getting his bad guy groove on. And once again, he totally nails it. Before he became typecast as upstanding citizens, the man was pretty damn versatile, which I’m only-now discovering.
KITTY CONSENSUS:

Yes discovered his versatilty and complex layering of characters late in the game...myself