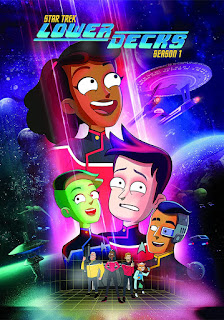 Much more Star Trek do we really need? What can yet-another series bring to the canon that doesn’t feel like a re-hash?

Perhaps those are two questions the creators of Star Trek: Lower Decks asked themselves. If so, they’ve managed to respond quite amusingly.

First, the concept alone is a great idea. With Federation ships that big - and crews numbering in the hundreds - surely there was interesting stuff going on somewhere besides the bridge. The primary characters are lowly ensigns and new crew members stuck with menial daily operations of the U.S.S. Cerritos, itself just a secondary ship in the fleet that’s mostly assigned “second contact” missions.

Second, not only is Lower Decks animated, the show is primarily a comedy. However, it’s no parody. Despite often being very funny - especially as the season progresses - Lower Decks is still a part of the established Star Trek universe, taking place after Star Trek: The Next Generation and its subsequent movies. Not only that, episodes feature plotlines and missions that are certainly “Trek-worthy.” However, they usually take a back-seat to what’s going on away from the bridge.

Just like any other Trek series, success or failure is largely dependent on its characters, and Lower Decks features engagingly quirky ones. With the exception of Captain Freeman, the officers are mostly broad caricatures and the closest the show usually comes to parody (and generally spot-on). However, the main characters, led by openly brash & defiant ensign Becket Mariner, are fleshed-out quite well and uniquely endearing.

Lower Decks doesn’t forget its past, either, with frequent references to characters, plots and terminology from other series. Not every episode knocks it out of the park, but for the most part, the show is enjoyably silly and often quite clever, especially when irreverently dropping familiar Trek tropes, which long-time fans will get a kick out of. I don’t know how long its premise can stay fresh, but these 10 episodes get the show off to a good start.

“LOWER DECKTIONARY” - 10 short featurettes - one per episode - about various aspects of the series’ creation.

“FACES OF THE FLEET” - A look at the main characters, featuring interviews with the cast, writers and producers.

“HIDING IN PLAIN SIGHT” - The show is loaded with Easter Eggs, shout-outs to previous shows/movies. This short doc highlights many of them.

“CRISIS POINT: THE RISE OF VINDICTA TRAILER” - Faux trailer of the holodeck “movie” from episode 9.