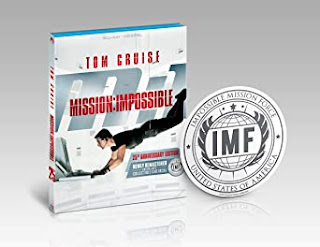 When it comes to collecting movies, I’m a sucker for bells and whistles, and not just upgrading to a remastered version or checking-out bonus features missing from my cruddy old DVD. I’m the guy who once nabbed a second Blu-ray copy of The Shining simply because the new one came with a Jack Torrance keychain.

And I’m pretty certain I’m not the only one who re-bought J.J. Abram’s Star Trek just to score the Enterprise replica the disc comes stored in (which looks bitchin’ in my display case). What can I say? Movie swag is cool, especially if it’s something beyond the Star Wars and Marvel stuff.

That being said, the first Mission: Impossible movie is now 25 years old, the brand name since-becoming more associated with Tom Cruise than Peter Graves. Regardless of how one feels about that - or Mr. Cruise - it was the start of a franchise that’s not-only ongoing, it arguably gets bigger and better with each new film. But even though a lot of folks were put-off by the fate of one of TV’s most iconic characters - including Graves himself - Mission: Impossible is conceptually more faithful to the original series than subsequent sequels, which more-or-less turned Ethan Hunt into an American James Bond (not that there’s anything wrong with that, either). It also happens to be the last good movie Brian De Palma ever directed.

Such a legacy certainly warrants some kind of commemoration, and as someone who’s always loved the franchise (save for the brain-dead eye-candy of Mission: Impossible 2), I can’t think of a cooler way to subtly declare my nerd-dom than a collectible car decal. Subtly is the key word here. You probably can’t drive ten miles without spotting some guy’s Jedi family in the rear window, but only the serious geek - or secret agent - will even know what the IMF emblem even means. Needless to say, I slapped that baby on the rear bumper of my Renegade before even reviewing the disc (see above).

Speaking of which, this 25th Anniversary Edition also features a new remaster of the film, which is a significant improvement over the first 2007 Blu-ray and every subsequent re-issue (of which there have been plenty). Other than the decal, however, no new bonus features are included. All supplemental material is carried over from the original release.

All of which means casual fans need not apply. This version of Mission: Impossible is for all the videophiles out there, as well as anyone who ever tapped their disposable income for a movie they already owned just because the new version came with a poster. You know who you are.

FEATURETTES (All of them are carried over from original 2007 Blu-ray) - “Mission: Remarkable - 40 Years of Creating the Impossible” (though it’s mostly about this film); “Mission: Explosive Exploits”; “Mission: Spies Among Us”; “Mission: Catching the Train”; “Mission: International Spy Museum”; “Mission: Agent Dossiers” (not actually a featurette, but an interactive expose of each IMF character in the film)

THE STICKER...which is already on my car.