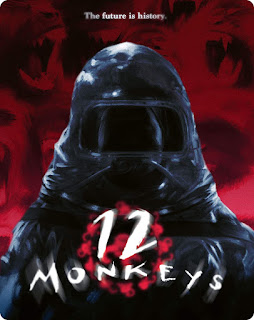 One of the coolest things about 12 Monkeys is that its temporal logistics hold up under closer scrutiny than most other time travel movies, perhaps because it doesn’t bite off more than it can chew. Rather than focusing on the consequences of altering history and other labyrinthine complications, there’s a haunting sense of inevitability that not-only establishes a dark mood from the very first scene, it’s the driving force behind the entire narrative.

We’re basically screwed and no hero from the future can save us from ourselves. When James Cole (Bruce Willis) “volunteers” to time travel to the mid-90s, it’s just to bring back a virus sample in hopes that future folks can quit living underground. The rest of the story deals with how this simple mission becomes a clusterfuck. Despite the bleak, nihilistic tone, director Terry Gilliam still manages to squeeze his playfully twisted sense of humor into the narrative. My favorite example is the revelation that time travel is more of a crapshoot than an exact science. In fact, we sometimes suspect the people who sent Cole to the past don’t really know what the hell they’re doing.

Elsewhere, 12 Monkeys arguably remains Gilliam’s best film. It’s certainly his most straightforward, with noticeably greater emphasis on the story and characters than his usual penchant for self-indulgence. Not that the movie isn’t without its eccentric flourishes, but from a narrative standpoint, 12 Monkeys is his most cohesive work (perhaps because he left the screenwriting duties to someone else for a change).

The film is, of course, a modern sci-fi classic and I suspect most people reading this have already seen it numerous times (which is why I didn’t bother rehashing the plot). It’s also safe to assume a lot of them already own the film, perhaps even Arrow Video’s 2018 Blu-ray, which sported a terrific restoration and good selection of new & archival bonus features. That being said, the only difference between that disc and this one is the Steelbook packaging with newly commissioned artwork by Matt Griffin. While I don’t think it ranks among the best work he’s done for Arrow, at least it differs from the original cover art, which should please collectors.

THE HAMSTER FACTOR AND OTHER TALES OF TWELVE MONKEYS - Feature-length making-of documentary, which was mostly shot during the film’s production. Amusing and informative, this is easily the best of the bonus features.

THE FILM EXCHANGE WITH TERRY GILLIAM - 1996 interview in front of a film festival audience. I’ve always enjoyed listening to Gilliam.

APPRECIATION BY IAN CHRISTIE - Gillian on Gilliam author discusses the film in detail.

THE TWELVE MONKEYS ARCHIVES - This is an image gallery, and a pretty big one, with behind the scenes photos and promotional material (mostly posters).