MORGUE: Too Much Bread, But the Meat is Good 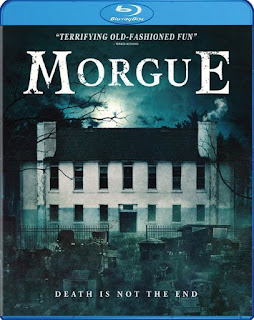 Morgue is one-third of a great movie. Like a juicy broiled burger patty slapped between two big stale buns, it features a terrific middle act, but you gotta slog through a rote, occasionally stupid set-up to get to the meat.

Diego (Pablo Martinez) is a self-absorbed loser with a bitchy girlfriend (who serves so narrative purpose whatsoever). On his way to her place, he hits and kills a man with his car. In a panic, he leaves the scene. The next night, he takes a temp job as a security guard at a hospital morgue, where of course, his victim is lying dead on one of the slabs. And once Diego's alone, he’s not quite alone; for the next thirty minutes or so, he’s subjected to strange noises, creaking doors, objects moving, flickering lights and a mysterious hooded derelict. It’s a checklist of stuff you’ve seen in a million other horror movies, routinely recycled.

However, once Diego becomes trapped in the morgue itself, it’s like writer-director Hugo Cardozo suddenly flips a switch, cranking up the atmosphere, scares and an impressive amount of escalating dread. None of it is terribly original and doesn’t always make a lot of narrative sense, but the entire morgue sequence is extremely well-executed, visually and sonically, with one gruesome shock after another. Even Martinez’ performance achieves an intensity we never saw during the first act, effectively conveying Diego’s descent into madness.

But all good things come to an end, sometimes too soon. Once the action leaves the morgue itself, the meat is gone with a lot of bun left over. Morgue culminates in a drab resolution that’s not-only predictable, it goes on far too long, including a completely out-of-place final scene that diffuses the ominous tone Cardozo tried so hard to establish.

Perhaps Morgue should have been produced as a short to begin with. Even with a scant 81 minute running time, it feels awfully padded out. Less bread and more meat would have been preferable. Still, the patty itself is probably tasty enough to make the whole burger worth ordering.