Akira Kurosawa’s RAN arrives on Digital 7/6
Ran – Akira Kurosawa’s visually dazzling samurai epic – blends King Lear, 16th-century feudal Japan, and Kurosawa’s own notions of loyalty and honor to tell the story of aging Lord Hidetora, whose decision to bequeath his kingdom to his three sons sparks a power struggle that leads to chaos and madness. Hailed as a masterpiece by filmmakers and cinephiles alike, the film stars Tatsuya Nakadai (Hara-Kiri, Kagemusha, The Tale of The Princess Kaguya), Akira Terao (After the Rain, Half a Confession, Letter from the Mountain), Jinpachi Nezu (Kagemusha, Farewell to the Land, Runin: Banished), and Daisuke Ryû (Kagemusha, Legend of the Devil, Metropolis). Nominated for four Academy Awards®, including Best Director, Ran will be available on Digital in 4K for the suggested retail price of $12.99. 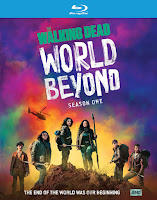 THE WALKING DEAD: WORLD BEYOND - Available on DVD and Blu-ray 6/15
RLJE Films will release The Walking Dead: World Beyond Season 1 on DVD and Blu-ray on June 15, 2021. Set in the same universe as “The Walking Dead,” The Walking Dead: World Beyond Season 1 stars Aliyah Royale (“The Red Line”), Alexa Mansour (Unfriended: The Dark Web), Hal Cumpston (Bilched), Nicolas Cantu (“The Powerpuff Girls,” “The Amazing World of Gumball”), Nico Tortorella (Scream 4, “Younger”), Annet Mahendru (“The Americans”) and Julia Ormond (Legends of the Fall, The Curious Case of Benjamin Button). Now a decade into the apocalypse, sisters Hope (Mansour) and Iris Bennett (Royale) have grown up inside the walls of one of the few remaining first-world communities. Their home, the Campus Colony, is a satellite settlement with a population of just under ten-thousand, located a hundred miles outside the surviving city of Omaha, Nebraska. The sisters' scientist father conducts research over one-thousand miles away in a research facility run by the Civic Republic, an ally of Omaha, but one that does not reveal its location to outsiders. When the sisters receive a message that their father might be in danger, they defy their own community's rules and enlist their friends Elton (Cantu) and Silas (Cumpston)to embark on a cross-country quest to save him. Leaving their sheltered upbringing behind, these teenagers learn how to fight threats both living and dead as they travel through a beautiful but decaying and dangerous world. 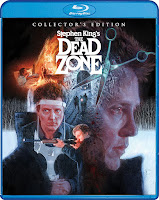 THE DEAD ZONE Collector’s Edition on Blu-ray 7/27
School teacher Johnny Smith (Chistopher Walken) had a beautiful fiancée, a rewarding career and a fortunate life ... until one tragic accident changed everything. After slamming into an 18-wheeler, Johnny is plunged into a five-year coma. When he awakens, he finds his true collision was with destiny – he now has the remarkable gift (or curse) of seeing into the future. From horror master Stephen King and Director David Cronenberg (Scanners, Dead Ringers), this supernatural thriller turns an everyday guy into a reluctant hero ... saving children in danger, helping the police and finding a serial killer. But Johnny's next vision may be his most terrifying yet ... 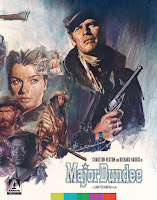 Sam Peckinpah’s MAJOR DUNDEE 2-Disc Limited Edition on Blu-ray 6/29
Sam Peckinpah's Major Dundee gets a Limited Edition 2-disc Blu-ray release on June 29. Set during the American Civil War, the film was panned during its 1965 release, but has seen reappraisal in recent years and is now considered to be one the most violent and realistic westerns ever made. Starring a slew of icons including Charlton Heston and Richard Harris, and featuring the beautiful cinematography of Sam Leavitt, Major Dundee is more than worthy of a second life. This 2-disc includes both the original theatrical release and the 136-minute extended cut.
Posted by D.M. Anderson at 12:46 PM