IT HAPPENED TOMORROW: A Fun Look at the Future 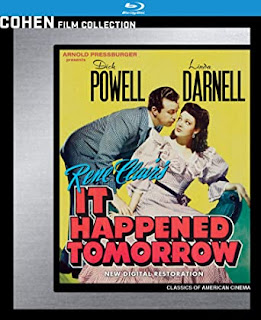 This featherweight obscurity puts a congenial spin on the tried-and-true “be careful what you wish for” formula. It Happened Tomorrow may not be an all-time classic, but it’s a lot of freewheeling fun.

Dick Powell plays Larry Stevens, an obituary writer for an evening paper who finally gets a shot at being a big time reporter...with a bit of otherworldly help. Shortly after musing how great it would be to know the immediate future, wise old colleague Pop Benson obliges him with a copy of the next edition one day early, the headline story being a theater robbery. Taking advantage of the knowledge - and saving his job - Larry is on the scene to cover the robbery as it’s happening, then turns in the story he wrote in advance.

However, this raises police suspicion that he’s one of the robbers, and they don’t buy his story about the mysterious newspaper. Meanwhile, Larry’s new girlfriend Sylvia (Linda Darnell), who makes a living pretending to predict the future, tries to help him prove his innocence. With later editions Pop gives him, Larry uses it to play the ponies so he can marry Sylvia, but also reads a headline story detailing his own death.

The film is actually a lot more whimsical and funny than the story suggests. Though somewhat cocky, Larry is a likable guy and quite charming while he courts Sylvia...who is initially put-off by his advances. Also amusing are Inspector Mulrooney (Edgar Kennedy), the exasperated detective who doesn’t believe a word Larry says, and Sylvia’s overly-protective uncle, Oscar (Jack Oakie).

Efficiently directed by René Clair, It Happened Tomorrow is never very deep, but it's fast-paced, fun and features an exciting climax that brings the story to a clever, satisfying conclusion. Restored for Blu-ray, the overall video quality is quite good. However, the audio is less impressive, with distortion pretty noticeable during dialogue-heavy scenes. Other than that, this is an entertaining little fantasy film worth discovering.