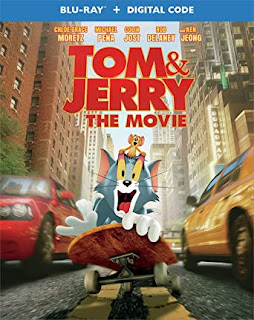 To give you an idea of what’s in-store, Tom & Jerry opens with animated pigeons rapping directly to the audience. Neither the sequence nor the song have anything to do with the story or the film’s iconic titular characters.

In fact, an abundance of hip-hop and R&B tunes are gratuitously inserted throughout, either underscoring the action sequences or - in one glaringly superfluous scene - a T-Pain number serving as Tom’s voice as he soulfully croons to Toots, a cat he’s infatuated with. I’m not sure who decided sick beats would be more suited to Tom and Jerry’s brand of slapstick mayhem than a traditional incidental score, but it feels like a pandering attempt to make the film hip...you know, for “today’s kids.”

Elsewhere, Tom and Jerry never speak, which is about the only remaining aspect of the classic cartoons you might have grown up with. Instead, they skateboard, fist-bump, operate drones and a variety of other things “today’s kids” might think are cool. In other words, this ain’t your daddy’s Tom & Jerry. Instead, the brand is a vessel for a parade of noisy mayhem, characters with “attitude” and, of course, a prerequisite poop joke so funny they included it twice.

As for the plot, Tom & Jerry drops them into the real world, where they interact with live characters. Young slacker Kayla (Chloë Grace Moretz) cons her way into a job as a wedding planner in a ritzy New York hotel, just before the marriage of two wealthy socialites. However, Jerry has moved into the hotel, so Kayla hires Tom to get rid of him. Chaos ensues. Meanwhile, Kayla’s understandably exasperated supervisor, Terence (Michael Peňa), eventually tries to sabotage her efforts. Tom and Jerry find themselves setting aside their differences and teaming-up with Kayla to save the wedding.

The combination of live action and animation is well done, though it's certainly no Who Framed Roger Rabbit and the pair’s frequent battles are generally more destructive & loud than creative or funny. Neither Tom nor Jerry display any distinctive personalities, either. This could be a clash between any cat and mouse. The live actors don’t fare any better. Moretz isn’t required to do much but act snarky and brash, while Peňa is wasted in a thankless role, tasked with simply being an uptight antagonist. Why is a guy this naturally funny regulated to a befuddled straight-man?

But will “today’s kids” like Tom & Jerry? Maybe younger ones who’ve never seen the duo’s cartoon classics (or even heard of them). Others, however, might find themselves wondering what director Tim Story was trying to accomplish, since this film plays more like one of his own sloppy comedies than an homage to two iconic characters.

GAG REEL - Mostly the cast clowning-it-up in front of the camera.