ESCAPE FROM FORT BRAVO and the Archaic Enemy 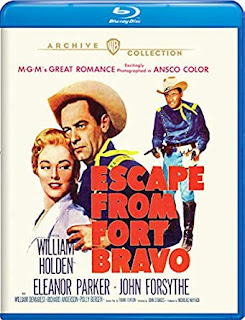 Even though John Sturges is one of my favorite directors from the classic era, I’ll be the first to concede he was sometimes inconsistent and Escape from Fort Bravo doesn’t rank among his best. He knows his way around a horse and as westerns go, it’s certainly watchable, but we sure ain’t talkin’ The Magnificent Seven, here.

Time hasn’t been quite so kind to this one, either, and not just because of its depiction of Native-Americans as screaming, bloodthirsty savages. Plenty o’ westerns are guilty of that, though this one tends to abuse the practice more than most. Serving ‘em up as a common enemy for Union and Confederate armies to team-up against is a pretty archaic concept. If this were remade today, the South would likely be the bad guys.

But hey...context...I get it. What really dates the film is primarily aesthetic. There are some fine Death Valley locations (especially during the final act), but all-too-often, it’s obvious much of the film was shot on studio sets and the visual disparity between the two is jarring. I dunno...maybe that’s partially due to the Blu-ray transfer, or that it was shot in “Ansco Color.” Whatever the case, it sometimes sucks our attention from the story, which actually ain't half bad.

William Holden plays Captain Roper, a hard-nosed Union commander of a Civil War prison camp who generally treats his captured Confederates pretty well...unless they try to escape, of course. However, escape is exactly what Captain Marsh (John Forsythe) has in-mind. Part of his plan involves using ex-lover Carla Forester (Eleanor Parker) to distract Roper with her wares, which sort-of makes her a western femme fatale.

Though the two end up falling in love, Eleanor, Marsh and a few other Confederate soldiers manage to escape to the desert....a monumentally bad idea because - all together now - it’s Indian Country! Roper sets-out to bring them back, but once he finds them, they all become trapped in a small gully, surrounded by gobs of whooping, hollering Indians (who are mostly just faceless cannon fodder).

The resulting stand-off is the highlight of the film, mainly because we’re never sure who’s gonna live or die. Elsewhere, the performances and direction are decent, though everyone on both sides of the camera have done far better work elsewhere. Ultimately, Escape from Fort Bravo is a product of its era...watchable, but not particularly memorable.