THE COLUMNIST: A Writer's Revenge Fantasy 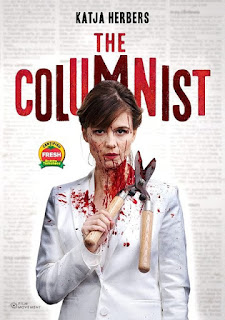 As any writer who regularly publishes on the internet will attest, trolls come with the territory. Emboldened by their anonymity, they have all the balls in the world when it comes to tearing others down. You can practically see a smug, punchable smirk spread across their face as they hit ‘send,’ completing yet-another mission of being a total dick.

I generally don’t mind comments and am certainly luckier than the protagonist of The Columnist, a meek, sensitive writer who’s subjected to vicious levels of verbal abuse from anonymous trolls, many who attack her because she’s a woman. Most of what I get are contrary opinions or readers correcting me when I get facts wrong (which I actually appreciate). Still, I occasionally get personal attacks from asshats comforted by the knowledge they’ll never be called on their bullshit face-to-face.

But what if they were?

That’s the premise of The Columnist, an amusingly vicious Dutch black comedy in which writer Femke Boot (Katja Herbers) becomes obsessed with the horrible personal comments from various readers - all of them men - affecting her ability to finish the book her publisher is demanding. After Femke discovers one troll is a neighbor, she kills him. The gratification she feels not-only encourages her to hunt down others - and take their middle fingers as trophies - her subsequent killing spree does wonders for overcoming writer’s block.

Meanwhile, her teenage daughter, Anna (Claire Porro) is dealing with free speech issues at school, being kicked off the newspaper by her uptight principle. While this subplot initially seems unrelated, I suspect it’s inclusion is intended as another reminder that “freedom of speech” does not mean freedom from consequence. And right now, in the real world, there are a lot of dumbasses who need to remember that. In a sick & twisted way, this clarification sort-of justifies Femke’s actions. Despite her violent responses, there’s no point where we feel her victims don’t have it coming. Less interesting is Femke’s relationship with fellow writer Steven Dood (Bram van der Kelen), who sort-of serves as a moral compass and offers the sound advice of never reading comments. For the most part, he is inessential to the plot, save for making a horrific discovery late in the film. Aside from that, The Columnist offers a pretty funny writer’s revenge fantasy featuring a character we empathize with, even as she’s dispatching her enemies. After all, they could have disagreed nicely, but chose to be dicks instead. Serves ‘em right.
KITTY CONSENSUS: