SANTA SANGRE: Insanity Gets an Upgrade 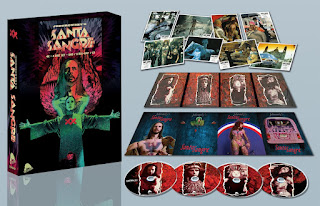 Confession time, folks. Though certainly aware of the Chilean wizard of weird, I never took time to sit down and watch one of Alejandro Jodorowsky’s films until now. In some ways - mostly aesthetic - his reputation precedes him. Santa Sangre is bursting with colorful, bizarre and surreal imagery, some of which achieves a level of beautiful grotesquery I’m not likely to forget.

Conversely, despite a plethora of strange characters, dark psychedelia and symbolic set-pieces, Santa Sangre tells a surprisingly straight-forward story. Not that it’s anything that would ever play in a suburban multiplex, but beneath its trippy-dippy exterior beats the heart of a deliberately-paced psychological thriller...and ultimately a tragedy. Though Jodorowsky might take offense, the first film that came-to-mind afterwards was the original Psycho.

Though often horrifying, Santa Sangre isn’t a horror movie in the purest sense. But really, neither was Psycho. I guess it depends on one’s point of view, and this story is presented from the point of view of Fenix (Axel Jodorowsky), a “magician” seriously scarred by childhood trauma, which we see in a lengthy, disturbing flashback sequence: Growing up in a traveling circus, Fenix witnesses his rotund, philandering father cheating on his mother, Concha (Blanca Guerra), with the show's Tattooed Woman. Catching him in the act, Mom dumps acid on Dad’s nads. He, in turn, hacks off her arms before cutting his own throat.

Presently, Fenix escapes from a mental hospital at Concha’s behest. Cruel and verbally abusive, she forces him to serve as the arms she lost, which also includes brutally murdering any other woman he’s attracted to. Initially, Jodorowsky suggests an incestuous relationship, but the scenario doesn’t bare this out. Without ruining some of the film’s surprises - and genuine shocks - imagine Psycho from Norman Bates’ perspective. We’re watching a skewed perception of reality and can’t always trust what we’re seeing. And of course, I’m simplifying the hell out of the narrative. Fenix’s environment and tragic path - real or imagined - are far more complex.

That’s a newbie’s takeaway, for what it’s worth. For dedicated “Jodophiles,” I guess what really matters is how their beloved cult classic fares on this 4-disc Digipack. Severin Films first released it as a single-disc Blu-ray in 2011 with a pretty decent smattering of bonus features. But it’s been newly remastered and offered in both 4K Ultra HD and Blu-ray. I can’t draw comparisons, but the picture and sound quality of the restoration - overseen by Jodorowsky himself - is outstanding.

However, what might really make this beautifully-packaged set worth the upgrade are the extra bells & whistles. Some of the supplemental material is carried over from the previous release, but there’s a big batch of new stuff, too, the most interesting of which is a CD of Simon Boswell’s original soundtrack. For anyone with an appreciation for one of cinema’s most notorious eccentrics, this is a must-own.

“FORGET EVERYTHING YOU HAVE EVER SEEN: THE WORLD OF SANTA SANGRE” - Excellent feature-length documentary, originally released in 2011. It may not be brand new, but it’s easily the best of the bonus features.

“THE LANGUAGE OF EDITING” - Interview with editor Mauro Bonanni.

“GOYO CARDENAS SPREE KILLER” - A disturbing short doc about the real-life killer who inspired the movie.

“CLOSE YOUR EYES” - Music video for the song.