The Historical Importance of CHILDREN OF THE CORN (1984) 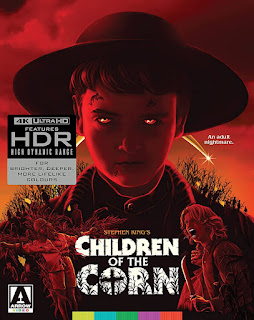 From a certain historical perspective, Children of the Corn might be one of the most significant Stephen King adaptations of the ‘80s.

Back then, it seemed like a new King movie was coming out every month, but until 1984, they were all big budget adaptations of his novels. Children of the Corn, however, took a pretty sparse short story, padded it out to feature length and slapped the author’s name above the title. Cheaply made, it ended up being hugely profitable, resulting in - so far - eight sequels and two remakes. Not too shabby for a movie whose monster is just a wheelbarrow rolling beneath a slab of tarp.

But more importantly, Children of the Corn opened the floodgates for all of King’s work - not just the bestsellers - to be potential film fodder. Ever since, opportunistic producers, moguls and studios big & small have been finding creative & not-so-creative ways to adapt King’s shorts, novellas, anthologies and grocery lists, even if a few of them weren’t remotely conducive to feature-length storytelling. Some were good, others were bad, but Children of the Corn was first.

The film itself was kind of silly even back in ‘84. Today, it looks and sounds downright archaic, but isn't without its campy charms. The plot, of course, only partially resembles the original story (which wasn’t all that great to begin with), diluted with a lot more exposition, including some major characters that weren’t even created by King. We also have Linda Hamilton in her first substantial role. Easily delivering the best performance of the film, we see why she went on to bigger and better things while most of the other cast members didn’t.

Speaking of which, one could argue that some of Children of the Corn’s appeal is due to the histrionic performances of John Franklin and Courtney Gains as Isaac & Malachi, the ringleaders of the murderous child cult terrorizing “outlanders” Vicky & Burt (Hamilton & Peter Horton). Saddled with some of the most eye-rolling, grandiose dialogue in B-movie history, these guys glower, snarl and emote with such dead-serious, over-the-top zeal that the results are memorably comedic.

During the film, we can practically see the production budget being slashed along the way, which must have been completely tapped-out by the time they got to the final act...a glorious goofy climax with special effects that look like they were created in a public access TV studio, with a quick stop at Home Depot along the way.

But hey, a film doesn’t become a cult classic by boring us to death. As the primary offering of cut-rate King, Children of the Corn is still a considerable amount of fun. Sure, some of that’s due to the campier elements, but the film is also an indicative example of low-budget ‘80s horror, so the nostalgic value of this one remains pretty high…

...which is obviously why it’s been repeatedly released on home video ever since. Now Arrow Video is serving it up in 4K with a picture quality that’s hit & miss - a lot of intermittent grain - but an impressive 5.1 audio track (Jonathan Elie’s eerie score sounds wonderful). The disc also comes with a bunch of vintage bonus features culled from both Anchor Bay’s 2009 Blu-ray and Arrow’s own 2017 release. The extras are all very enjoyable, partially because they’re substantial, but also from the boundless enthusiasm of nearly everybody who was interviewed.

“IT WAS THE EIGHTIES” - Interview with actor Linda Hamilton.

“RETURN TO GATLIN” - A look back at the filming locations.

“STEPHEN KING ON A SHOESTRING” - Interesting interview with producer Donald D. Borchers, who can more-or-less credit his career to this movie. He even produced a remake.

“WELCOME TO GATLIN: THE SIGHTS AND SOUNDS OF CHILDREN OF THE CORN” - Interviews with production designer Craig Stearns & composer Jonathan Elias.

“AND A CHILD SHALL LEAD THEM” - A 50-minute interview with actors Julie Maddalena & John Philben, the latter of whom is probably best-known for Return of the Living Dead. (This feature is not listed on the box)

“FIELD OF NIGHTMARES” - Interview with screenwriter George Goldsmith. (This feature is not listed on the box)

“CUT FROM THE CORNFIELD” - A short interview with actor Rich Kleinberg, whose part was cut from the film.

“DISCIPLES OF THE CROW” - A short film based on the same story. The cover says it was made in 1983, but iMDB dates it 1991. Either way, it’s strictly amatuer night.

STORYBOARD GALLERY (This feature is not listed on the box)