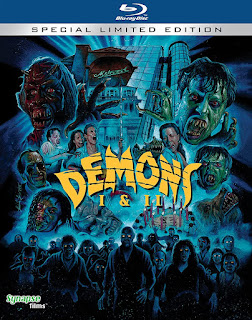 On this side of the pond, Demons and Demons 2 were perennial home video favorites among the hard core horror crowd, achieving a sizable cult following along the way. Venture into any mom & pop video store during the ‘80s and chances were the boxes and tapes for these two titles were among the most battered & tattered, the likely result of word-of-mouth advertising (“Dude, you gotta check this shit out!”). Whether or not these Italian splatterfests were actually any good was always a matter of perspective.

From a narrative standpoint, there’s only marginally more plot and character development than you'd find in a video game. In 1985’s Demons, several people are invited to the premiere of a new horror movie at a local theater. This movie-within-the-movie starts turning patrons into bloodthirsty monsters, save for a few characters we’re expected to root for because they’re the last ones left. The plot of Demons 2, which followed a year later, is nearly identical, only set in a high-rise apartment building. Since this one ignores the apocalyptic implications of the original’s climax, it could arguably be considered more of a reboot than an actual sequel (a few of the same actors return, playing completely different characters).

In either case, once the basic scenario is quickly established, the story, characters and logic take a backseat to a non-stop parade of violent mayhem. Despite a team of screenwriters, the complete lack of story expansion suggests they were making things up as they went along (which would explain a previously never-seen helicopter crashing through the theater roof in Demons, thus giving survivors a way out).

However, ‘good’ is in the eye (and ears) of the beholder. Taken as pure sensory experiences, Demons and Demons 2 work quite well. Both films are visual & sonic assaults (’80s style!), so frantically paced that one can probably overlook the piecemeal plot, daffy dialogue and atrocious acting. The horrific make-up effects - especially the demon transformation sequences - are pretty impressive even by today’s standards. And admittedly, there are some nice atmospheric touches that give both settings a creepy vibe, especially in the first film. The visceral thrills are given considerable punch by the booming soundtracks, both combinations of synths (of course) and songs by notable rock artists of the day. Watching a dude ride a motorcycle through a zombie-filled theater while Saxon roars from the speakers is a ridiculously rousing highlight.

Since both films are definitely products of their time, this two-fer from Synapse Films is a pretty cool collection of nostalgic nastiness for anyone who first discovered their gory glories while perusing the horror section of their local video store. In addition to a good selection of new & vintage bonus features, some aesthetic goodies are tossed in that should please die hard fans.

MOVIE TICKET REPLICA - Like the one from the film, with disc transfer specs on the reverse side.

PARTY INVITATION REPLICA - With disc transfer specs on the reverse side.