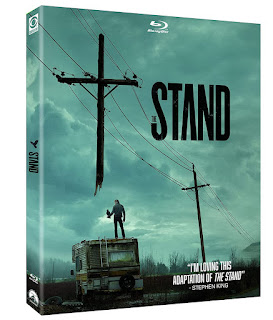 Review by Carl, the Couch Potato😼

Stephen King’s The Stand is the greatest novel ever written. Anyone who disagrees either hasn't read it or is simply wrong. Those of us with nothing but gushing praise have been waiting decades for a worthy film adaptation. And considering its epic scope, that was always gonna be a tall order. The 1994 ABC miniseries was a damn good try. But while certainly faithful to the book, it never escaped the inherent smallness and standards of network television.

So we kept waiting, and for years were teased with on-again-off-again stories of a real movie...maybe more than one in order to encompass the apocalyptic grandeur of the novel.

Of course, TV has changed a lot since the ‘90s. Suddenly, another miniseries seemed like a good idea again. So here we are with a new version of The Stand, unbound by any restrictions regarding violence, gruesome imagery, sex or language (all of which the book had in abundance). Nothing would make me happier than saying it gave me the same out-of-body experience as the novel, but I’m afraid my wait for a definitive adaptation continues (which will probably never happen at this point).

That’s not to say 2020’s The Stand is an abject failure. On the contrary, there are some truly great moments spread throughout these nine episodes, including one aspect that actually improves on the novel. But for everything it does right, there are times we’re wondering what the hell they were thinking. Taking a cue from Sergio Leone, here’s the good, the bad and the downright ugly of The Stand:

THE GOOD: First off, it makes good on the promise of retaining the nastier aspects of the book. Its unflinching depiction of Captain Trips - the virus which wipes out most of the population - is unsettling and suitably grotesque. Elsewhere, the graphic violence is offered at a level the first miniseries could only hint at. There are also some really good performances, including Alexander Skarsgard as the menacing Randall Flagg (though he’s not as much fun as Jamie Sheridan was in the role). Owen Teague is terrific as Harold Lauter, a dangerously unstable teenage loser who was cartoonish in the 1994 version, but is truly creepy here. I also gotta say that James Marsden looks and sounds exactly as I envisioned main hero Stu Redman when reading the book. The story as-presented requires patience, but the final three episodes are genuinely gripping, gruesome and feature surprising story changes. King himself wrote a new ending, which I must admit is a significant improvement over the unnecessarily protracted coda of his book.

THE BAD: Fans of the book will definitely cry foul at many of the narrative details (or lack thereof). Not necessarily what’s done differently - like relocating Larry Underwood’s (Joven Adepo) terrifying journey through the dark of New York’s Lincoln Tunnel to an underground sewer - but skimming over many characters’ side-stories during their cross-country journeys (a huge part of what made the book so epic). On a related note, some major characters have been greatly reduced, such as deaf-mute Nick Andros (Henry Zaga), who’s damn-near a peripheral character here and almost inconsequential to the story. But the biggest shame is what they did to Lloyd Henried (Nat Wolff). As Flagg’s loyal right-hand man, he was one of the book’s more intriguing characters. But instead of a troubled soul, he has the personality of an obnoxious YouTuber.

THE UGLY: By far, the biggest bone of contention is the inexplicable decision to present much of the story out of sequence. As Episode 1 begins, the plague has already wiped out most of the population, and only through flashbacks do we learn how the primary players end up in Las Vegas or Boulder. Not only does that negate any suspense over whether or not they survive their treks, the best aspect of the novel was how Captain Trips spread across the country. Witnessing the end of the world first was always an essential element of its ominous tone. There’s absolutely no convincing narrative reason to rearrange the order of so many key moments. Thankfully, the last half of the series pretty much leaves the flashbacks behind and sticks to King’s sequence of events.

But even with its major issues, The Stand is watchable, perhaps more so for fans of the book than those who’ve never read it because we can fill in all the pieces the narrative chooses to leave out. And despite the jumbled sequencing and glaring omissions, it is a relatively faithful adaptation, with just enough alterations to keep things interesting. In that respect, this version is best viewed as more of a companion piece than a definitive adaptation, which we’ll just have to keep waiting for.

“AN APOCALYPTIC EPIC: ADAPTING THE STAND” - Pretty decent featurette featuring interviews with most of the cast, as well as some behind-the-scenes footage.