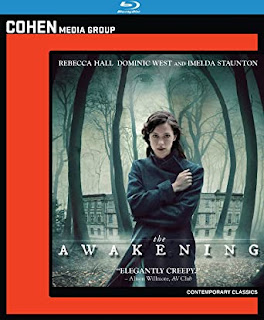 Florence (Rebecca Hall) is an author and professional ghost hunter. However, she doesn’t actually believe in the supernatural. Instead, she’s become somewhat famous for exposing the fakery behind so-called hauntings around England in the 1920s.

When teacher Robert Mallory (Dominic West) invites her to a boarding school to investigate a supposed haunting that may have resulted in a student’s death, she’s initially reluctant. Florence finds no joy in being a professional skeptic, which for-some-reason has taken an emotional toll and hasn’t exactly endeared her to people. But of course, there’d be no movie if she didn’t change her mind.

Though Florence utilizes a variety of interesting gadgets to find a rational explanation for the strange occurrences, this time there's a real ghost lurking the halls, presumably a young boy who was murdered years earlier. It’s a revelation that’s almost too much for Florence to handle, for reasons which become an important component of the narrative when the spirit’s ultimate purpose is eventually revealed.

Deliberately paced but very atmospheric, The Awakening plays its story close to the vest, using the first half to effectively establish the key characters and setting, the latter being a labyrinthine mansion converted into a school. With most of the kids sent home with their parents, the empty rooms and drab decor are quietly unnerving. Along the way, there are many effectively chilling moments - including a knock-out sequence involving a dollhouse replica of the mansion - few of which rely on special effects or cheap jump scares.

The final act features surprising, unpredictable plot turns that are smartly realized, though might be considered a little anticlimactic to horror fans weaned on visual flash. But contextually, any other approach would negate the quiet tension established during the rest of the film. So while The Awakening is never flat-out terrifying, it’s consistently creepy.