CORRIDOR OF MIRRORS and the Bond Connection 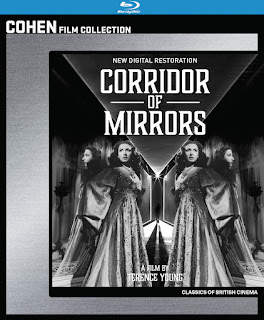 Though relatively obscure, Corridor of Mirrors might be of some historical interest for a few reasons.

First, this is the first feature film directed by Terrence Young, probably best known - to those who pay attention to this sort of thing - as the guy responsible for some Connery-era James Bond films, not-to-mention one of the 60s' best thrillers, Wait Until Dark. As such, it’s a fairly impressive debut. Speaking of Bond, Miss Moneypenny herself, Lois Maxwell, also appears in a supporting role.

Additionally, this is Christopher Lee’s very first film, though it isn’t a significant part. In fact, if you turn away for a minute you might even miss him, playing a snarky nightclub patron. Of course, Lee has a Bond connection as well.

But perhaps most significantly, the main protagonist is played by Edana Romney, who also co-wrote the film and formed a production company just to get it made with herself in the starring role. I don’t know if she intended it to be a springboard for bigger & better things - which didn’t happen - but a woman taking creative control of her own career was fairly rare in those days.

The movie itself is a gothic romance with sinister undertones. When we meet Mifanwy (Romney), she’s on her way to “meet” her lover, which turns out to be a wax figure in a museum featuring notorious criminals & killers. As narrated by Mifanwy, the story flashes back to when she first meets Paul Mangin (Eric Portman), a wealthy, enigmatic, sophisticated artist who’s both respected and resented by the upper-class community. Mifanwy becomes immediately smitten - practically enchanted - and the feeling appears mutual.

However, the more time they spend together, the more Paul appears to be grooming her for some mysterious purpose. Though she realizes she’s being manipulated - even being instructed what to wear, with dresses he designed specifically for her - Mifanwy finds herself unable to resist him, though she’s free to leave whenever she wants. Then she meets Veronica (Barbara Mullen), a woman she discovers has been confined in Paul’s mansion for years, who warns her that he has dark motives. When confronted, Paul claims Mifanwy is the reincarnation of his former lover, who betrayed him centuries earlier.

Not quite a horror film or thriller, Corridor of Mirrors often feels like both, largely thanks to its fluid pace, atmospheric production design and underlying theme of dangerous obsession. Though this may have been intended as a star vehicle for Romney - and she is good - it's Portman who steals the entire movie, exuding a constant level of subtle menace beneath all that regal charm.

And just when the viewer thinks they know where the story is going, it turns out we don’t. The narrative serves up a pretty nifty twist at the end, one that would seem right at home in a film noir thriller. It’s a nice capper to a dark, engaging film that’s worth rediscovering. And if nothing else, it’s a chance to see the humble beginnings of a few British cinema legends.