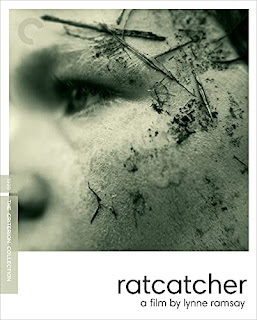 Review by Fluffy the Fearless😿

Something tells me Ratcatcher will never air on The Hallmark Channel.

At first, we assume young Ryan Quinn is the protagonist, since the opening 10 minutes follows him as he breaks from his mother’s protection to play near a creek with James Gillespie (William Eadie), another kid from the same decrepit Glasgow neighborhood. However, James accidentally drowns him, then runs away from the scene, hoping no one saw him.

James’ life sucks, though we get the impression that, until the drowning, he was blissfully unaware how awful things really were. His family lives in the worst neighborhood in town, exacerbated by a local garbage strike. The government is slowly trying to relocate families to more livable housing, but until then, the Gillespies dwell in squalor. There’s no toilet, vermin are everywhere and their street is clogged with mountains of trash. Since Dad (Tommy Flanagan) is constantly drunk, Mom does most of the parenting, which includes regularly brushing lice from her kids’ heads. But for the most part, the family remains optimistic life will change for the better once they’re relocated.

Outside of the house, we meet the kids James usually hangs out with (none of whom appear to be going to school), including a local gang who bully others and regularly team up to rape Margaret Anne (Leanne Mullen), an older girl with whom he forms an intimate (non-sexual) bond. Then there’s Kenny, a slow-witted animal lover whose pets generally end up dying, such as his mouse, Snowflake, which he tries sending to the moon by tying a balloon to its tail.

All the while, Ryan’s death weighs heavily on James, as does the growing hopelessness he feels as life trudges on as usual. Aside from brief comfort in Margaret Anne’s company, he finds respite taking solitary bus trips to a housing development still under construction. Wandering the rooms and halls, taking-in all the accoutrements the Gillespies don't have, he briefly imagines living in comparative luxury before being forced to return to reality, which is becoming increasingly unbearable.

From the opening scene, Ratcatcher is relentlessly bleak, its pessimistic tone broken only once, when the narrative pauses to depict Snowflake’s whimsical balloon voyage to the moon, where he frolics with its fellow rodents. Initially, it seems wildly out-of-place compared to the rest of the film’s stifling oppressiveness. However, with hindsight, the denouement ultimately reveals this seemingly innocuous scene to be an ominous piece of foreshadowing.

But despite the somber narrative and depressing aesthetics - aided immeasurably by suitably drab cinematography - Ratcatcher is engaging. Mostly devoid of feel-good moments, we’re nevertheless invested in the Gillespies. James, in particular, more than earns our empathy, even though he’s not always a particularly nice kid. But writer-director Lynne Ramsay certainly demonstrates a knack for creating vivid, authentic sounding child characters, meaning James behaves and reacts much like any real kid would under such circumstances.

Ramsay would go on to greater notoriety with such dark excursions as We Need to Talk About Kevin and You Were Never Really Here, but she earned her stripes as modern cinema’s preeminent Debbie Downer with this, her debut feature. As such, Ratcatcher may not be an entertaining film, though it’s certainly a compelling one.

3 SHORT FILMS - “Small Deaths,” “Kill the Day” and “Gasman,” all made prior to Ratcatcher...and just as uplifting.