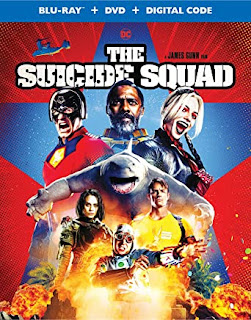 Review by Tiger the Terrible😻

The smartest move DC ever made was to quit concerning themselves with cinematic world building and focus on making (mostly) standalone films that were simply entertaining...and didn’t require a master’s degree in Snydernomics to appreciate.

Their second smartest move was nabbing James Gunn for The Suicide Squad, and not just because the first film was terrible. Material like this needs Gunn’s flair for irreverence, clever dialogue and, most importantly, instilling characters with engaging personalities. He may not have created Suicide Squad, but this adaptation has his stamp all over it.

And for the first time since his directorial debut, Slither, Gunn is unbound by the restrictions of a PG-13 rating, something else the material really needed. Hence, the film is vivid, violent and vulgar, yet at the same time, seldom feels pandering or gratuitous. Punctuated by gobs of gags and hilarious dialogue, the movie earns its dismemberments and f-bombs along the way. In fact, the whole thing plays very much like Guardians of the Galaxy without a filter.

And like Guardians, it’s ultimately the characters that matter. Ironically, the one we’re most familiar with - Harley Quinn (Margot Robbie) - is the least interesting, perhaps because she’s already been established with two previous films and there isn’t much more Gunn could do with her. But everyone else is wonderfully realized and played perfectly by the ensemble cast. As Bloodsport, the de-facto leader of this new team, Idris Elba strikes the right balance of stoicism and uncertainty, while John Cena (as Peacemaker) once-again demonstrates he’s more adept at comedy than pure action. Polka-Dot Man (David Dastmaichian) and Ratcatcher 2 (Daniela Melchior) are also fun, each with amusing backstories. But King Shark steals every scene he’s in, a perpetually hungry manfish who manages to be both monstrous and endearing (and a role Sylvester Stallone was born to play).

With the exception of Task Force X director Amanda Waller (Viola Davis), the antagonists are perfunctory. Their plan, however, is gloriously insane; the dictator of Corto Maltese plans to wipe out America using a 30-year-old experiment gone wrong: Starro, a giant extraterrestrial starfish that spawns face-hugging offspring to re-animate & control the dead. This leads to a final act that’s as hilarious as it is grotesque, aided by amusing visual effects.

Unlike the first film - which was mostly just bells & whistles - The Suicide Squad is the complete package, delivering an abundance of action, humor, violence and well-realized characters. James Gunn’s playful approach is just what was needed, making it the best - and maybe the smartest - DC film since Christopher Nolan hung up his spurs.

FEATURETTES - “Bringing King Shark to Life”; “Gotta Love the Squad” (a mini history of the comic series); “The Way of the Gunn” (gushing praise for the director, who probably deserves it); “Starro: It’s a Freakin’ Kalju!” (how the climactic monster was created); “The Making of the 4 Most Epic Scenes.”

GAG REEL - A pretty long one, too.

3 RETRO STYLE TRAILERS - Not trailers that were actually used, but pretty funny.