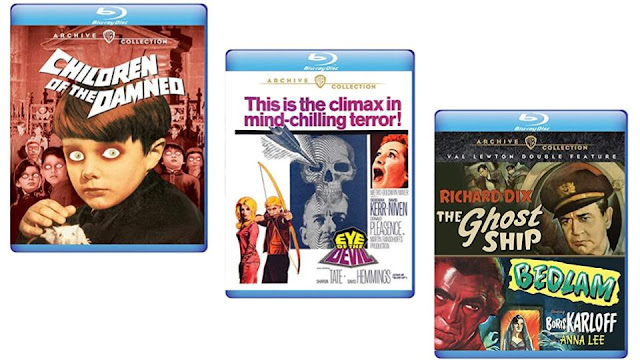 FROM WARNER ARCHIVE COLLECTION
Review by Josey, the Sudden Cat🙀

Just in time for Halloween, Warner Archive serves up a trio of terror titles...a classic sequel, an oddball obscurity and a dark double-feature from a legend of low-budget horror. For adventurous fright fans who are looking to go really old school this season, all three are interesting alternatives to what generally passes for horror these days.

Children of the Damned is the less-renowned sequel to the classic, Village of the Damned, released three years earlier. Since Village is arguably one of the greatest British horror films of the decade, doing any kind of worthy follow-up was always going to be a tall order.

But while the law of diminishing returns certainly applies here, Children isn’t without considerable merit. Rather than rehashing the same horror, this one focuses more on the sci-fi elements of the concept while throwing in some surprising social commentary. There’s a new batch of creepy kids with terrifying abilities, this time gathering in England from around the world. But the real antagonists are the various governments who want them back to exploit their powers, or destroy them if they can’t.

One noteworthy aspect of the film are the two lead characters, Tom Lewellin & David Neville (Ian Hendry & Alan Badel), who wish to study the children, not destroy them. They also happen to be live-in partners, making this a particularly progressive story element considering England’s legal views on homosexuality at the time.

Directed by J. Lee Thompson, Eye of the Devil initially came & went with little fanfare, but earned some belated notoriety after David Hemmings became a star and Sharon Tate was murdered.

However, the film has more to offer than that, a somewhat surreal - some might say disjointed - journey into a world in which cult-like traditions and behavior are explored. Deborah Kerr plays Catherine, a well-to-do wife and mother whose husband, Philippe (David Niven), is summoned back to the old vineyard which has been in his family for over a millennium. Against his wishes, she follows him there with the kids in-tow, eventually discovering the family’s (very) dark past and paganistic rituals (of which Philippe is regrettably involved).

Sometimes maddeningly ambiguous, Eye of the Devil is nevertheless an atmospheric, creepy film with a terrific cast (Donald Pleasance, in particular, stands-out with a menacing performance as an evil priest). Thematically, the film could even be seen as a spiritual precursor to The Wicker Man. Though never as artfully presented, this film has enough quiet tension and haunting moments to make it worthwhile.

In some ways, producer Val Lewton was to the ‘40s what Roger Corman was to the ‘50s, the preeminent purveyor of low budget horror. But unlike most of the quickies cranked out by Corman and his ilk, Lewton’s films often emphasized atmosphere and mood over cheap thrills. Not every film he produced was compelling, but nearly all of them were at least interesting to look at.

For example, 1946’s Bedlam doesn’t rank among Lewton’s best, but benefits from an inherently spooky setting - a lunatic asylum - and an entertaining performance by Boris Karloff. He’s actually sort of miscast - looking really awkward in 18th Century garb & wig - but certainly seems to be having a good time. The story, however, isn’t particularly original or engaging.

The Ghost Ship, on the other hand, is a tension-filled gem and arguably the best Val Lewton film hardly anyone has seen. Russell Wade is Tom Merriam, the new third officer onboard the Altair, a cargo ship commanded by narcissistic, tyrannical Captain Stone (Richard Dix). As the voyage continues, Stone becomes increasingly unhinged and eventually homicidal, deliberately causing the death of a crewmate. However, the crew refuses to back-up Tom's story during an inquiry, either out of loyalty or fear.

Tom ends up back on the ship, ostracized by the crew and now fearing for his life, leading to a suspense-filled final act. Despite the title, this is more of a psychological thriller than pure horror. The Ghost Ship tells a gripping story, anchored by an unnerving performance by Dix, who effectively conveys Stone’s slow descent into madness. And like Lewton’s other films, the setting sets the tone, with the ship serving as a dark, claustrophobic prison (ultimately for both main characters).

TRAILERS FOR EACH FILM