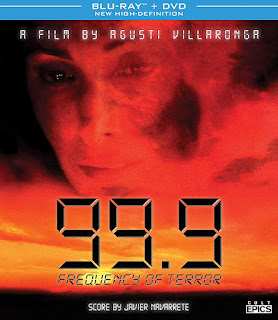 One of the cooler things about this gig is having the opportunity to discover older films that somehow escaped my radar. And even though I’m fairly well-versed in the horror genre, I must confess I’d never previously heard of 99.9, even though it’s 24 years old. For that, I blame my local Blockbuster, which hardly ever carried foreign films, to say nothing of foreign horror films.

The title refers to a radio station where Lara (Maria Barranco) is the host of a paranormal phone-in talk show. Following the mysterious - and violent - death of her estranged boyfriend, she receives a videotape he made of bizarre experiments he was conducting in a rural Spanish village. Lara goes there hoping to learn more about what happened, only to find the village mostly abandoned, and the creepy house where the experiments took place has a pretty nasty reputation for killing people.

But don’t start assuming this is just another haunted house story. It's far more intriguing than that. The owners of the place had their mother, Delores (Terele Pavez), committed for claiming the numerous faces in the walls are actually alive. We see those faces often as the story unfolds...sometimes clearly, other times barely visible. Either way, they’re visually unnerving, kind of like when you start seeing faces in the stucco if you stare at the ceiling long enough. In fact, a creepy atmosphere hangs over the entire film. Aided by truly impressive cinematography, 99.9 almost has the look and feel of folk-horror.

In addition to the unique assortment of oddball characters - only Lara seems to have her head screwed on right - the initially languid tone & pace slowly ramps up the tension, culminating in a climax that’s both disturbing and grotesquely funny. Best of all, this is a smart film, with interesting, unpredictable plot revelations. Therefore, 99.9 is highly recommended for adventurous horror lovers.