What Lurks IN THE SHADOW OF HOLLYWOOD? 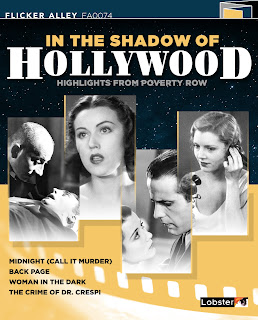 Four low budget films produced outside the Hollywood studio system - aka “Poverty Row” - are included in this two-disc set. With no unifying theme or genre, the only common thread is that they were originally released in the mid-thirties and are efficiently made with limited resources. Some offer more fun than others and there’s a surprise or two to be found.

Kicking things off is Midnight, a meandering melodrama that takes place on the eve of a woman’s execution, mostly focused on its impact on the Weldon family, whose patriarch was the jury foreman during her trial. This one is noteworthy for an early appearance by Humphrey Bogart in a supporting role as a gangster. It was re-released in the late ‘40s as Call it Murder, this time with Bogey’s name prominently featured in the main titles and promotional material. He’s easily the best part of the film, but only appears in a few scenes. The rest is comparatively rote.

Watching Back Page, I was eventually struck by a bit of deja vu. Then about half-way through, it hit me...this film was included as a bonus feature with the Blu-ray release of Deluge a few years ago, presumably because both starred Peggy Shannon. She plays a reporter who leaves her big city job to work at a small-town newspaper, dealing with local politics and no small amount of resentment. Shannon is good - and it’s a shame she died so young - but the fact that 30 minutes passed before realizing I’d seen it before is a testament to how dull it is.

Conversely, Woman in the Dark is a crackling little crime drama featuring a very young Ralph Bellamy as John Bradly, on parole and hoping to start over. This is made difficult when he comes to the aid of Louise (Fay Wray), trying to escape her powerful-but-cruel ex-lover, Tony (Melvyn Douglas). John & Louise become fugitives after he punches one of Tony’s thugs, who ends up in the hospital and might die. Since John was first-convicted for a similar incident, a manhunt ensues. This film features some genuine suspense and Tony is certainly a hateful antagonist - even ordering the death of a dog! - but the movie belongs to Bellamy, who makes a stoic antihero.

But the highlight of this set is The Crime of Dr. Crespi, an enjoyably histrionic variation of Poe’s “The Premature Burial.” Erich von Strohein chews up the scenery as the titular character, using his authority and medical expertise to get rid of rival Dr. Ross, who stole his girlfriend. Trusted to perform an emergency surgery on Ross, Crespi administers a drug that simulates death, thus assuring the man will be buried alive. This entertaining slab of psychological horror benefits from an inherently morbid premise and performances that aren’t particularly subtle, but certainly a lot of fun.

It would be pretty cool if Flicker Alley intends to make In the Shadow of Hollywood an ongoing series. There’s definitely a lot of forgotten Poverty Row quickies waiting to be rediscovered and the films included here - two per disc - have been nicely restored for Blu-ray. From an entertainment standpoint, Woman in the Dark and The Crime of Dr. Crespi are minor gems, while Midnight (Call it Murder) at least offers a look at pre-stardom Bogey. Back Page is little more than disc filler.

AUDIO COMMENTARIES FOR EACH FILM