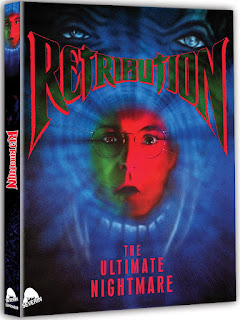 Retribution is a (very) ‘80s horror film that never got a fair shake at the box office. It was pretty much thrown away by its distributor, being unceremoniously dumped into only a handful of theaters before popping up on video shelves. And like so many other fright films of the decade, it became a minor cult favorite.

Still, Retribution remains comparatively obscure compared to, say, The Hidden, which is sort of a shame because, although conceptually different, they share a similar aesthetic. Those who consider the ‘80s to be the golden age of horror owe it to themselves to check this one out, because not only does it serve-up some sensational savagery, it’s very-well made on a limited budget.

Pity poor George (Dennis Lipscomb), a down-on-his-luck artist who survives an attempt to kill himself. At the same time, local loser Vito is sadistically murdered, but is somehow able to inhabit George's body. Whenever George falls asleep, Vito takes over and ventures out to get revenge on those who killed him...in a variety of nasty ways. But unfortunately, George remembers the murders after awakening. Still, he can’t convince his shrink, Dr. Curtis (Robin Wing), that he’s suffering from anything more than a nervous breakdown. Lt. Ashley (Hoyt Axton), on the other hand, is convinced George himself is responsible, especially in-light of his emotional instability.

The story itself is somewhat derivitive, but what makes the movie really pop are the main characters, especially George. He’s genuinely endearing and sympathetic, so much so that we truly pity what’s happening to him. He’s well-played by Lipscomb, who does a tremendous job conveying emotional vulnerability, most apparent during George’s growing romantic friendship with his neighbor, Angel (Suzanne Snyder), a sweet-natured hooker.

However, one significant narrative misstep is how the antagonists are introduced. We know George/Vito is out for vengeance, but learn almost nothing about his targets - or Vito, for that matter - until the film is two-thirds of the way over. In fact, the first time we even see any of them is just before they die. While we ultimately concur they have it coming, their grisly deaths would be more satisfying if we witnessed their atrocities against Vito beforehand.

Speaking of which, Retribution features some pretty vivid death scenes, punctuated by good ol’ fashioned practical effects that are more-or-less convincing. This Blu-ray set features both the original U.S. theatrical cut and the much-ballyhooed Dutch version, the only difference being that the latter lingers on these creative kills a little longer. Those with an appreciation for such things should definitely pop-in the Dutch cut. Additionally, there’s a generous batch of retrospective bonus features, including numerous entertaining interviews and an audio CD of Alan Howarth’s synth-happy score (it was the ‘80s, after all).

“SANTA MARIA, MOTHER OF GOD, HELP ME!” - Interview with actor Mike Muscat, who plays Vito being burned alive in a flashback sequence.

“THE ART OF GETTING EVEN” - Interview with artist Barry Fahr.