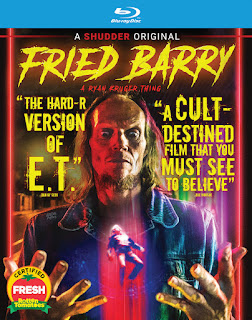 Barry (Gary Green) is indeed fried, strung-out on heroin most of the time. He lives in squalor, neglects his family and is generally a despicable scumbag.

Then he’s abducted by aliens one night, who use him as a vessel to interact with humans undetected. However, since Barry’s environment is the wrong side of town, the only folks Alien Barry meets are lowlifes, junkies, pimps, prostitutes, and perverts. Most of the film is a grand tour of bars, whorehouses and abandoned buildings. He finds himself inadvertently engaging in much of the same decadent behavior Real Barry does, only with bug-eyed wonder.

But Alien Barry eventually develops something resembling a conscience, learning how to express love to Real Barry’s wife from watching TV...and giving her the best sex she ever had. In fact, Alien Barry has a lot of sex during the movie, even impregnating a prostitute, who immediately goes into labor and pushes out a baby. Elsewhere, he manages to rescue several missing children by killing the pedophile who abducted him.

Grimy & gross with a pitch-black sense of humor, Fried Barry has obvious cult aspirations, balancing the comedy with a surreal trippiness that's probably best be appreciated after a few bong hits. Sometimes it succeeds, with scenes that range from funny to I-can’t-believe-I’m-seeing-this. Though not really required to display much in the way of real acting, Green gives an interesting physical performance with a cache of crazed facial contortions, making him the perfect guide for a tour of Cape Town’s seedy underbelly.

However, a little of this goes a long way. The non-stop parade of repellent imagery and bizarre behavior frequently threatens to become rote - only to be rescued at the last second by an interesting plot development. Perhaps that’s not too surprising, since Fried Barry was first produced as a short (also included on this disc). Here, some lengthy sequences sort of feel like they were specifically created to pad things out.

But ultimately, Fried Barry is worth checking out. Though the pace lags at times and attempts at edginess sometimes feel superficial, there’s quite a bit of creativity behind the grungy aesthetics. And believe it or not, this depraved variation of E.T. manages a couple of touching moments of its own (fleeting as they might be).