WARNING and the Dark Side of Personal Technology 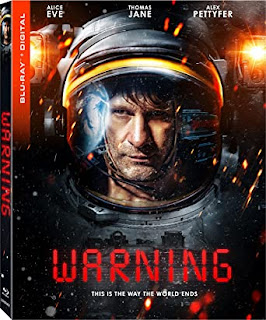 Playing almost like an anthology film, Warning is both intriguing and frustrating.

The narrative juggles several stories related to the dark side of personal technology, or more specifically, how it negatively impacts or influences our lives, often at the expense of real human interaction. Though technically science-fiction, the gadgets presented in the film represent the logical evolution of devices that already exist, adding an unnerving level of plausibility.

The only tenuous connective thread between these stories is that they take place during some kind of apocalyptic global phenomenon. The film opens with satellite maintenance worker David (Thomas Jane) becoming stranded in space, which serves as a frequently-revisited wraparound story for the other ones, some that are resolved in a scene or two, others that recur throughout the film are often left open-ended. Segments include a tech salesman deciding the fate of an obsolete android, a young man who uses VR to stalk an ex-girlfriend and a woman whose immortally-enhanced boyfriend is also programmable (by his domineering parents).

The best story might be the most culturally relevant, in which religion and prayer is typically practiced using an Alexa-like box named God. When one woman’s device stops working, she doesn’t know how to speak to God manually, but is later horrified when her upgraded box appears to be truly omniscient. As for David...he has no chance of returning to Earth, so he spends his remaining time recording a message to his neglected daughter (even though she’ll never hear it).

Warning presents some provocative ideas and disturbing insights on how the seemingly innocuous tech-toys we take for granted can enable questionable behavior and have psychological consequences. Unfortunately, most sequences don’t come to any kind of satisfactory conclusion, positive or otherwise. They simply end, which is probably by-design since the abrupt (and bleak) climax precludes any traditional closure. Those expecting anything resembling traditional conflict resolutions or character epiphanies will likely be a little frustrated.

Still, Warning is sometimes an intriguing film, partially because of its unusual narrative structure, but mostly because the dark path taken by these characters seems alarmingly plausible...maybe only a few years from now.