The Ongoing Irony of SCREAM 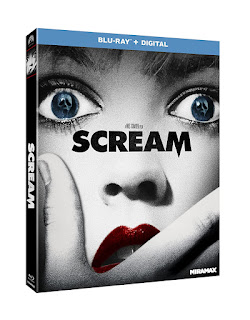 25 years later, it might be hard to appreciate just how groundbreaking Scream was at the time. Arguably the first self-aware slasher film - it ironically breathed new life into the very genre it methodically deconstructed. In the process, Scream became as influential on 21st Century horror as Halloween and Friday the 13th were on the ‘80s.

Slasher movies were briefly en vogue again, especially those hell bent on conveying their own hipness. But Scream’s influence extended beyond mere slice & dice spectacles. Excluding pure parodies, serving-up tongue-in-cheek references to traditional horror clichés has itself become cliché. Even Scream ultimately fell victim to its own cleverness, ironically becoming a franchise and running the concept into the ground.

So context is everything, because without it, Scream will come across to newcomers as...well, a tired old slasher film with a ridiculously silly killer. But knowing it was the first of its kind makes one really appreciate the deceptively smart script, which is stuffed with references to films that were still part of everyone’s horror vernacular back then. In a narrative masterstroke - again, for the time - the characters are equally aware of those films and tropes (though they don’t always heed their own advice when it comes to survival).

Screenwriter Kevin Williamson deserves some of the credit, but a most should go to director Wes Craven (RIP). Who better to deconstruct the horror genre than one who made a career from it? As such, Scream may not be his best, but is certainly his smartest. In another example of irony, it was arguably the mass appeal of this film that briefly allowed Craven to explore other genres.

And Scream ain’t quite dead yet. Even though the novelty wore off years ago, there’s a fifth film due in early 2022. But like most horror franchises, the original is likely to remain the best of the series. It’s being re-released on Blu-ray for its 25th anniversary, though the only significant upgrade is a new - and brief - retrospective featurette that doubles as a promotion for the new film. Enormously influential, Scream belongs in every respectable horror fan’s collection, and if it already is, you can probably give this particular disc a pass. But if not, here’s a chance to discover - or rediscover - where it all began.

“A BLOODY LEGACY: SCREAM 25 YEARS LATER” - The only new bonus feature, it features a few original cast members, but at least half of the interviews are people involved with the upcoming sequel.

FEATURETTES - Behind the Scenes; Q&A with Cast and Crew; production featurette (these are all carried over from previous disc releases).