THE AMAZING MR. X and the Gullible Gals 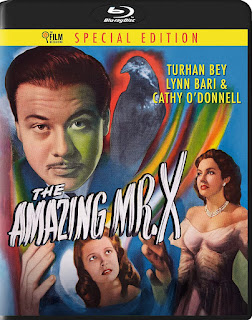 Well, I don’t know about amazing, but he’s certainly conniving. And I’m not sure why he’s been dubbed “Mr. X,” since at no time is he ever referred to as such. This film was originally called The Spiritualist, which is a bit more accurate, though I suppose The Amazing Mr. X looked cooler on a marquee.

Despite the sensationalistic title, this isn’t a sci-fi or horror film. It’s more of a noirish little thriller with Turkish heartthrob Turhan Bey as Alexis, a phony spiritualist who dupes gullible rubes into believing he can help them communicate with departed loved ones. His methods are quite interesting and we can easily see how they might trick the dimmer bulbs of our species.

Speaking of which, Christine (Lynn Bari) is a wealthy widow haunted by her dead husband, Paul, at which time Alexis is conveniently on-hand to help her speak to him. Younger sister Janet (Cathy O'Donnell) and Christine’s new fiance, Martin (Richard Carlson), suspect he’s a con man, but Alexis is good enough to convince Janet he’s legitimate. Then during a seance, Paul speaks out for-real, to even Alexis’ surprise. But it turns out Paul only faked his death and now needs money, which he plans to get by forcing Alexis to continue his ruse while courting Janet (who’s become smitten by him). In the meantime, Paul will continue “haunting” Christine to coerce her to an untimely death, which would result in Janet inheriting everything.

The story, of course, depends on both Christine and Janet being utterly stupid, which is fine, I suppose. After all, if the past few years have taught us nothing else, it’s that more people than we ever imagined are dumb enough to believe anything they're told. Still, it doesn’t render these two ladies all that sympathetic, especially considering Christine’s increasingly callous treatment of Martin, the one guy trying to save her through reason. What makes the film fairly engaging, however, is watching Paul & Alexis’ plan unfold, which takes a little patience because we have to wade through a lot of first-act melodrama. However, we’re rewarded with a fairly decent climax.

Elsewhere, The Amazing Mr. X benefits from a gothic aesthetic, enhanced by moody cinematography by John Alton. The scenes in and around Christine’s cliffside mansion - overlooking the ocean - are especially effective, with creative lighting and soft focus giving the outdoor scenes an almost dreamlike quality.

FEATURETTE - “Mysteries Exposed: Inside the Cinematic World of Spiritualism”