THE INCREDIBLE SHRINKING MAN: The Dark Side of '50s Sci-Fi 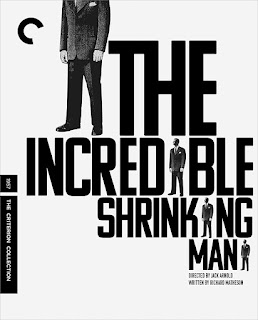 The Incredible Shrinking Man was sort-of a rarity at the time...a sci-fi film that belied its sensationalistic title & concept with an intelligent story, believable characters and a bleak, understated denouement. Along with Invasion of the Body Snatchers, the film could also be considered one of the earliest examples of ‘body horror.’

On paper, the plot certainly smells like teen drive-in fodder - and was often dismissed as such back then - with Scott Carey (Grant Williams) exposed to a mysterious mist while on vacation, which renders him increasingly smaller. Aside from a specialist briefly explaining that Carey’s molecules have somehow been re-arranged, no real reason is given...nor would one really suffice. Besides, what ultimately drives the story is Scott’s distressing psychological descent into...not quite madness, but initial self-loathing, then anger - while alienating his wife - before becoming completely isolated, both by design and through dire circumstances.

By the final act - now motivated by pure survival instinct - Scott grudgingly accepts his fate and an uncertain future, completing a psychological journey not unlike the five stages of grief.

Of course, what we mostly remember are Scott’s violent clashes with Butch, his beloved cat (!), and the angry spider in his basement, the latter being a fight to the death that - tellingly - Scott instigates. Those scenes remain great fun, with special effects that are still pretty impressive for a 64-year-old film. However, the real horror is what Scott has become, which renders his voiceover coda especially poignant...even if it does sometimes sound a bit overwrought.

We learn from this disc’s bonus features that Universal originally wanted a happier ending. But considering the consistently somber tone and the protagonist's relentless downward spiral, that would have been a cheap, pandering move. A major reason the film is an unqualified classic is that it doesn't let the viewer off the hook, leaving them more distressed over Scott's fate than he appears to be. Viewed in the context of when it was made, The Incredible Shrinking Man is actually pretty damn dark.

So it’s about time the film got a decent home video release. The Incredible Shrinking Man has been available on DVD for years, usually squeezed onto a disc with other nostalgic B-movies from the same era. But not only is it being served-up on Blu-ray for the first time with a wonderful 4K restoration, Criterion has thrown-in a big batch of new & vintage bonus features which nicely sum-up the film’s production, influence and legacy. From a historical perspective, this is an essential title for any collection and still a hell of a lot of fun.

“AUTEUR ON THE CAMPUS: JACK ARNOLD AT UNIVERSAL” - Excellent documentary of the director’s work for Universal.

“THE INFINITESIMAL: REMEMBERING THE SHRINKING MAN” - Interview with author-screenwriter Richard Matheson’s son, Richard Christian Matheson, who  discusses his father’s work during that period.

“TERROR AT EVERY TURN” - SFX featurette.

“LET’S GET SMALL” - Charming conversation about the film between director Joe Dante and comedian Dana Gould.

TEASER & TRAILER - Narrated by Orson Welles, whose voiceover can also be heard on the main menus screen (a nice touch).

8 MM HOME-CINEMA VERSIONS - I actually think this was my first introduction to the movie...back when I was just a young ‘un!

ESSAY - By author Geoffrey O’Brien (located in the insert, along with cast & crew credits).

MEE-OW! LIKE TAUNTING A MOUSE TO DEATH.
Posted by D.M. Anderson at 9:33 PM