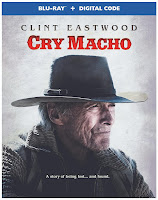 Clint Eastwood’s CRY MACHO on Digital 11/5 and 4K, Blu-ray & DVD 12/7
In 1979, Mike Milo (Clint Eastwood), a one-time rodeo star and washed-up horse breeder, takes a job from an ex-boss (Dwight Yoakam) to bring the man’s young son (Eduardo Minett) home from Mexico. Forced to take the backroads on their way to Texas, the unlikely pair faces an unexpectedly challenging journey, during which the world-weary horseman finds unexpected connections and his own sense of redemption. Experience an uplifting and poignant story of redemption when “Cry Macho” arrives for Premium Digital Ownership at home on November 5. The film is directed by Oscar winner Clint Eastwood (“Million Dollar Baby,” “Gran Torino”) from a screenplay by Nick Schenk and N. Richard Nash, based on the novel by Nash, and stars Eastwood, newcomer Eduardo Minett, Natalia Traven (“Collateral Damage,” TV’s “Soulmates”) and Dwight Yoakam (“Logan Lucky,” “Sling Blade”). The film will also be available on 4K, Blu ray and DVD beginning on December 7.

MALIGNANT Premium Digital Ownership 10/22 and 4K, Blu-ray & DVD 11/30
Director James Wan returns to his roots with this new original horror thriller. A woman is paralyzed by shocking visions of grisly murders, and her torment worsens as she discovers that these waking dreams are in fact terrifying realities. Discover terrifying realities when “Malignant” arrives for Premium Digital Ownership at home on October 22. Director James Wan (“The Conjuring,” “Aquaman,” “Furious 7”) returns to his roots with this original horror thriller.  The film is also from a screenplay by Akela Cooper (“M3GAN,” TV’s “Luke Cage”), story by Wan, Ingrid Bisu and Cooper, and stars Annabelle Wallis (“Annabelle,” “The Mummy”), Maddie Hasson (TV’s “Impulse,” TV’s “Mr. Mercedes”) and George Young (TV’s “Containment”). The film will also be available on Blu-ray and DVD beginning on November 30. “Malignant” will also be available on Movies Anywhere. Using the free Movies Anywhere app and website, consumers can access all their eligible movies by connecting their Movies Anywhere account with their participating digital retailer accounts. 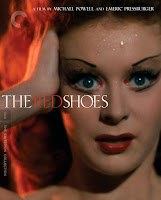 THE RED SHOES in 4K Coming 12/14
The Red Shoes, the singular fantasia from Michael Powell and Emeric Pressburger, is cinema's quintessential backstage drama, as well as one of the most glorious Technicolor feasts ever concocted for the screen. Moira Shearer is a rising star ballerina torn between an idealistic composer and a ruthless impresario intent on perfection. Featuring outstanding performances, blazingly beautiful cinematography by Jack Cardiff, Oscar-winning sets and music, and an unforgettable, hallucinatory central dance sequence, this beloved classic, dazzlingly restored, stands as an enthralling tribute to the life of the artist. FEATURES A 4K TRANSFER OF THE 2009 RESTORATION with uncompressed monaural soundtrack; DOLBY VISION/HDR PRESENTATION; 4K/BLU-RAY COMBO; numerous supplemental features. 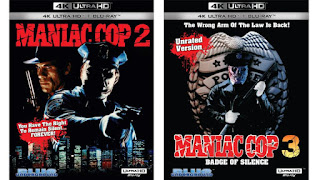