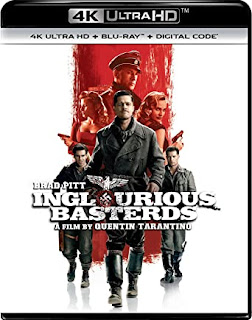 In this writer’s humble opinion, Quentin Tarantino is our greatest living filmmaker. Sure, it’s fashionable in certain snob circles to dismiss him as a brash rip-off artist who’s made millions by raiding the past. But hey, The Beatles were the sum of their influences, too, and with the possible exception of Chuck Berry, no one ever bitched about it.

Previous films and directors - both legendary & obscure - may inspire Tarantino, but like the Fab Four, his work bears his own indelible stamp. Each displays an unadulterated love of movies and his enthusiasm is contagious. His best remains Pulp Fiction, but it’s been damn fun watching him try to top himself and it’ll indeed be a sad day indeed if he ever makes good on the threat to retire after 10 films.

If Pulp Fiction is his best, Inglourious Basterds runs a close second. Not-so-much a war film as a celebration of the genre - particularly the European variety - it’s a brilliantly written piece of revisionist history, peppered with some of Tarantino’s liveliest dialogue. Naturally, he didn’t do it all alone. Perhaps more than any previous film, a couple of brilliant performances (by Brad Pitt & Christoph Waltz) are every bit as important to its overall success. Though top-billed, Pitt ain’t in the film nearly enough, while Waltz totally deserved his Oscar for Best Actor with a performance I never get tired of watching. 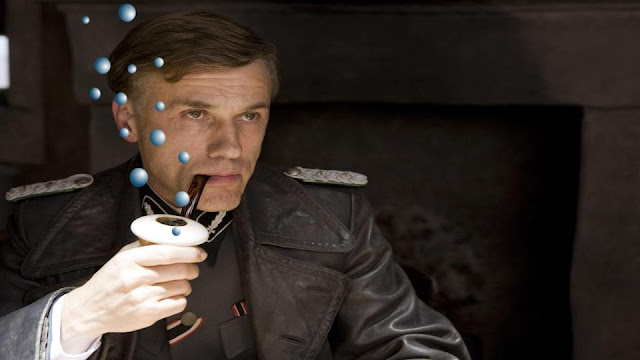 So of course the film is worth owning, but is it worth owning in 4K? That’s actually a tough question to answer. The original Blu-ray release already featured a pretty awesome video quality, so the differences between that one and this 4K picture are relatively small, mostly noticeable in the sharper facial details during close-up shots. Maybe someone with a better set-up than mine could argue otherwise. On the other hand, the 5.1 DTS audio is awesome.

Other than a digital copy, there aren’t any new bonus features. All of them are carried over from previous releases. Included on both the 4K and accompanying Blu-ray disc, they’re interesting and often pretty funny. But really, it’s only hard core videophiles who need to consider any kind of upgrade.

“NATION’S PRIDE” - The Eli Roth-directed short that served as the film shown in the French cinema during the final act.

FEATURETTES - “The Making of ‘Nation’s Pride’”; “The Original Inglorious Bastards” (a tribute to the film - and its director - that inspired the title); “A Conversation with Rod Taylor” (Taylor played Churchill in the film); “Rod Taylor on Victoria Bitters” (an amusing anecdote); “Hi Sallys” (something of a running gag during Tarantino shoots, in reference to editor Sally Menke); “Quentin Tarantino’s Camera Angel” (the director’s amusing clapboard operator).

MEE-OW! LIKE BEING TURNED LOOSE IN A BIRD SANCTUARY.
(though the disc itself is only recommended for big 4K fans)
Posted by D.M. Anderson at 9:12 PM