SPACE JAM: A NEW LEGACY and the All-Star Tribute 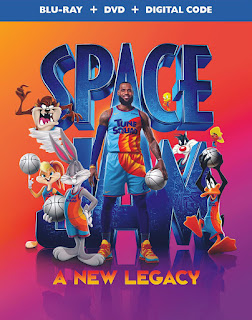 My first takeaway from Space Jam: A New Legacy is that the debate over whether LeBron James or Michael Jordan is the greatest baller may never be settled (inspiring an amusing throwaway line in the film), but the former is a better actor.

Not that the man is ready to star in a Broadway revival of Exodus, but James demonstrates more range, which is perhaps why the story - such as it is - includes some family dynamics which require him to display joy, anger, remorse and fear. Playing a fictionalized version of himself, he even appears fallible at times.

Of course, that family dynamic is just a plot device to team-up James with the Looney Tunes for yet-another high stakes basketball game, this time against a disgruntled, megalomaniacal algorithm (Al G. Rhythm, played by Don Cheadle), which has taken James’ computer wiz son, Dom (Cedric Joe). After digitizing them into Warner Bros’ “Serververse,” Al uses the video game Dom created to assemble a team of monstrously enhanced NBA stars, while James is stuck putting together another Tune Squad.

My second takeaway is that A New Legacy is just-as-much one studio’s all-star tribute to itself as a showcase for LeBron & his animated teammates. Yes, Bugs & the gang are prominently featured, but so is damn near every Warner-owned property that ever made a cultural impact. Some are mere shout-outs - with hundreds of famous TV & movies characters filling the background - while the likes of The Matrix, Harry Potter, Game of Thrones, Mad Max, Casablanca and the DC Universe are worked into the actual plot. Sometimes their inclusion is clever, sometimes gratuitous (and admittedly, it’s fun trying to spot them all).

But that ain’t really a deal-breaker. After all, the original Space Jam was more of a marketing campaign than an actual movie, albeit a frequently amusing one. Similarly, this belated sequel has its moments. Lebron can be quite funny at times and the entire sequence featuring his animated self in Toon World is wonderful, with outstanding traditional animation and the Looney Tunes behaving...well, like classic Looney Tunes (something the original never bothered with). Additionally, some of the early live-action scenes are clever. Even Lebron’s strained relationship with Dom is presented with a surprising amount of sincerity.

Things get a little out of hand during the climactic game, which comprises the entire second half of the film. The narrative begins to eschew genuine humor for blatantly calculated audience-pandering sequences, such as Porky Pig dropping a rap tune and Granny engaging in Matrix-style butt-kicking. This is also when the entire film dives head-first into CGI overkill, which includes upgrading the Looney Tunes themselves. Ultimately, the colorful, flashy and hyperkinetic special effects end up overwhelming the narrative.

I suspect those who grew up with Space Jam might be a little put-off by the sequel’s overemphasis on spectacle. At the same time, it’s obvious A New Legacy was created to appeal to a generation raised on the internet, immersive video games and the certainty that King James - not Air Jordan - is the greatest basketball player of all time. And for all I know, those same kids will find the sight of Porky rapping very funny. In that respect, I suppose the film succeeds.