WITCHING & BITCHING and the Pathetic Parent 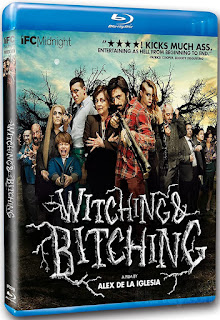 José (Hugo Silva) will probably never be nominated for Father of the Year.

He and a few desperate partners plan a bold heist from a pawn shop specializing in gold jewelry. However, he shares custody of his son, Sergio, with ex-wife Silvia (Macafena Gomez) and it happens to be his week with the kid. So José brings him along, with Sergio happily participating in the robbery. Following a violent shoot-out, José, Sergio & Antonio (Mario Casa) manage to get away by jumping into a taxi and forcing hapless driver Calvo (Pepón Nieto) to head to the French border. Unfortunately for them, their escape route includes driving through Zugarramurdi, a village populated by cannibalistic witches.

Meanwhile, Silvia is on their tail, hoping to get her son back. And she's being followed by two bickering cops who initially suspect she's an accomplice. Everyone ends up running around a decrepit old mansion with labyrinthine caves, violently clashing with the coven, who have evil plans for Sergio (not to give anything away, but it involves enslaving mankind). Jose also finds himself smitten with Eva (Carolina Bang), the sexy-but-psychotic daughter of the high priestess. And the feeling is mutual.

Witching & Bitching may not be the best horror film I’ve reviewed this year, but it’s definitely the funniest. Beginning with the opening robbery, the story masterfully balances witty dialogue, black humor and physical comedy, deftly performed by the ensemble cast. And unlike many horror-comedies that tend to run out of gas too early, this film remains consistently amusing. It’s also fast-paced, and not just in terms of the horror and action (there’s plenty of both). Befitting the sense of urgency felt by most of the main characters, the rapid-fire dialogue sometimes comes so fast that we don’t always catch the subtitles (this is a Spanish language film).

But since the dialogue is easily the best part, Witching & Bitching might justify repeated viewings just to catch everything you might have missed the first time. Still, the film is not a parody, nor is comedy isn’t all it has to offer. This is still a violent horror film...that just happens to be extremely funny.

FEATURETTES: “The Story”; “The Characters”; “Heist in Puerta del Sol.”