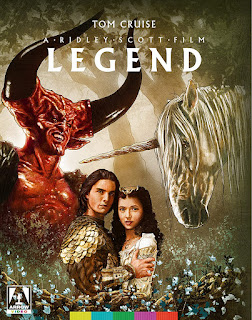 I’m a big fan of Ridley Scott. Alien, The Martian and Black Hawk Down are among some of my favorite films. At the same time, you’re looking at the one guy who hated Blade Runner and thinks Gladiator is one of the worst films to ever take home a Best Picture Oscar. But that’s what makes him interesting. The content and quality of his films vary so wildly that even most of his failures are somewhat fascinating.

Of course, ‘failure’ is a relative term. Take 1985’s Legend, for instance. Like Blade Runner, it was a box office dud upon release, but has since developed a cult following, albeit on a much smaller scale. The film was similarly dismissed by most critics at the time, though unlike Blade Runner, nobody’s retroactively mistaking this one for a masterpiece.

But you can always tell when a Ridley Scott film has a significant fanbase because there will inevitably be a Director’s Cut, often supervised by Scott himself. Only George Lucas is more notorious for tinkering with his own movies. However, I have to admit that his post-release meddling has occasionally resulted in a better film. I still think Blade Runner sucks, but must admit his 2007 Final Cut (so far) is at-least watchable.

Likewise, Legend’s 2002 Director’s Cut is something of an improvement, though still doesn’t address the film’s most glaring issues, most notably the generic story, laughable dialogue and a complete lack of interesting or original characters. However, the ending is more intriguing and Jerry Goldsmith’s majestic score better suits the story than Tangerine Dream’s new-age synths used in the theatrical version. There’s also a lot to love elsewhere - in either version - such as the lavish production design and Rob Bottin’s fantastic make-up work.

And whether anyone wants to admit it or not, Tom Cruise (looking like a 15-year-old) is actually pretty good. Before he became a box office phenom, there was always something endearingly earnest about his performances. I wish I could say the same thing about Tim Curry, who plays the Lord of Darkness. I know his performance has received praise - and he does attack the role with gusto - but his face and unique mannerisms are buried under so much make-up that the character could have been played by anybody. On a somewhat related note, I can’t help but think Lord of Darkness somehow influenced the depiction of Satan in Tenacious D in the Pick of Destiny.

The coolest thing about this new set is that both versions of the film are included, and there are enough significant differences between them that fans should have a good time concluding which is superior (if they haven’t already done so). Additionally, there are the usual bells and whistles that have become hallmarks of Arrow’s Limited Edition series...plenty of new & archival bonus features, a poster, lobby cards, photos, a meaty booklet and gorgeous packaging.

For those who love the film, this is a must own. For Ridley Scott fans, the significant changes and supplements might be interesting enough to warrant a purchase. For everyone else...why are you still reading this?

NOT BAD. THE MOVIE IS MIDDLING, BUT THIS SET IS LOADED.
Posted by D.M. Anderson at 8:52 PM