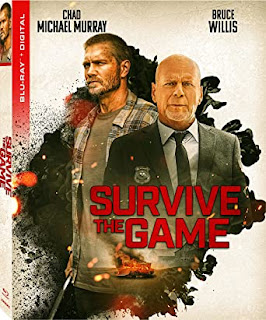 At the very least, Survive the Game isn’t yet another Bruce Willis smash & grab where he shows up for a few minutes in exchange for a paycheck and prominent billing. While I’m certain he’s still here for the paycheck - sometimes looking a bit drunk - his character actually sticks around for awhile. Still, he’s third banana to a couple of younger, hunker stars - Chad Michael Murray and Swen Temmel - neither of whom would’ve been fit to polish John Maclane’s badge back in the day.

Not to be confused with Survive the Night - an equally low-wattage action flick teaming Willis & Murray - this one features dedicated cop Cal (Temmel) trying to rescue wounded partner David (Willis) from a gang of drug dealers. They’re holding David hostage in an old farmhouse owned by Eric (Murray), still brooding over the death of his family, meaning he doesn’t care whether he lives or dies. But he insists on helping Cal because the farm is all he has left. Meanwhile, inside the house, David spends the majority of the film tied to a chair and taunting lead henchman Frank (Michael Snow), yet another graduate from the Hans Gruber School of Villainy.

The Die Hard references are appropriate, since Survive the Night follows the same blueprint, albeit on a much smaller scale. We have the out-numbered protagonists and severely overconfident bad guys, most of whom are just cannon fodder. Cal & Eric fight & grimace their way through a variety of the dumbest thugs I’ve seen in recent memory, which turns out to be a terrific source of unintentional humor. My favorite scene has the two dispatching a few baddies in a barn, and even though gunfire is exchanged, none of the thugs holding vigil just outside the door hear a thing!

The film is loaded with similarly hilarious implausibilities, such as a scene where Frank shoots Eric’s neighbor and could also take-out Eric, standing ten feet away. Instead, he watches dumbfounded as Eric scampers off, and then orders his men to go after him. Elsewhere, Willis provides a lot of embarrassingly bad wisecracks and threats before managing to fight his way to freedom. Bruce sure as hell ain’t the action hero he used to be and in-no-way are we convinced this old man could take on guys half his age.

However, the ridiculous action and phenomenally stupid characters are part of what makes Survive the Game sort-of a hoot. Despite the dead-serious tone - or perhaps because of it - a lot of this is actually pretty funny, compounded by an abrasive techno score to remind us how cool everything is supposed to be.