AN ANGEL FOR SATAN: Bodacious Barbara 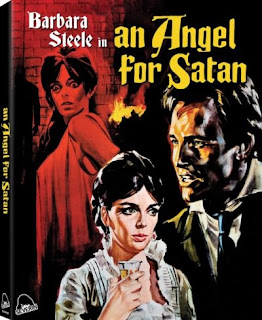 Sure, she’s done lots of other stuff - on both sides of the pond - but it’s the classic and not-so-classic spaghetti scarefests that made her cinema’s go-to goth gal. That’s arguably because Steele was always more than just a scream queen. She was a scream queen with class.

An Angel for Satan may not rank up there with Black Sunday, but it’s an enjoyable slab of gothic horror with the lovely Ms. Steele as its centerpiece. She gets to flex her acting skills in a role that requires her to adopt two distinct personalities within the same character. The first is Harriet, the young heir to the Montebruno estate who has returned home to claim her inheritance. She’s also the striking image of an ancestor whose image was immortalized by a statue. The second personality is Belinda, the vengeful spirit of that ancestor’s insanely jealous cousin (and who died trying to destroy the statue).

When the statue is fished from a nearby lake and hunky artist Roberto (Anthony Steffen) is hired by Count Montebruno (Claudio Gora) to restore it, “Belinda” apparently awakens within Harriet. She also has a huge chip on her shoulder, exacting revenge by seducing and manipulating a variety of vulnerable male characters, who end up committing several atrocities, often with fatal results. The superstitious townspeople think it's part of the statue’s curse and believe Harriet is a witch. Meanwhile, Roberto falls in love with Harriet, but is befuddled by her nasty behavior whenever “Belinda” shows up.

Stylish and atmospheric with just a touch of eroticism, An Angel for Satan is never particularly scary, but the story, setting and characters are engaging. Overall, the cast manages to overcome some amusingly clunky dialogue with decent performances. However, Steele owns the movie, commanding our attention whenever she’s on-screen. There’s always been a haunting - almost intimidating - aspect to her beauty (which is probably why she did so many horror films). But in addition to being easy on the eyes, she’s more than up to the challenge of playing what’s essentially two characters, sometimes within a single scene. It’s really a remarkable performance and the highlight of this film.

An Angel for Satan is relatively obscure compared to Italy’s gothic classics of the ‘60s, but it’s very well made and certainly worth checking out for those who hold the likes of Mario Bava in high esteem. In addition to a nice 2K restoration by Severin Films (with a good smattering of bonus features), we get Barbara at her most bodacious.

“THE DEVIL STATUE” - This is mostly an interview with actor Vassili Karis, who repeatedly declares how much he hates horror. He actually comes off as kind of a jerk.