THE SPORE and the Marauding Meatballs 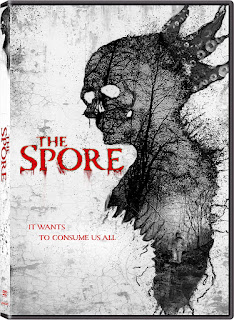 The Spore begins great, with a guy in a hazmat suit gathering data in the woods, occasionally coming across bizarre growths attached to dead tree limbs. Meanwhile, we hear radio reports about victims of an unknown fungus infection filling local hospitals. The man himself becomes infected after a dying camper excretes goo all over him.

Then the film falls apart.

There’s nothing wrong with the basic concept, in which these mysterious spores quickly spread by infecting victims with a flesh-eating virus and rendering them homicidal. Not only that, those infected ultimately spawn vicious monsters. Depictions of these transformations range from creatively disgusting to laughably silly, an example of the latter being snot-coated puppets that resemble meatballs with teeth. But we won’t hold the film’s limited budget against it.

What ultimately kills it is the narrative structure, a series of tenuously tied vignettes featuring various dull characters’ encounters with the infection. Other than title cards bearing their names preceding each story, we learn absolutely nothing about them. Not only that, the entire film largely depends on their utter stupidity, making slasher movie teenagers look like Einstein. One vignette ends, then another begins, and-so-on until the credits roll, with no style, suspense or substance to be found in any of them.

The only intriguing aspect of The Spore is the increasingly apocalyptic tone of radio broadcasts we frequently hear in the background, chronicling the spread. It’s too bad writer-director D.M. Cunningham didn’t have the resources to show some of what we’re hearing. It’d be a lot more interesting than watching consecutive episodes of dimwits dying in the boonies.

“THE SPORE: RANDOM ACTS OF FILMMAKING” - An entertaining and frequently funny behind-the-scenes featurette.