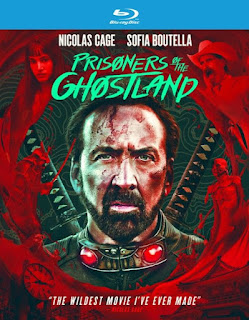 Nicolas Cage himself is quoted right on the cover as saying Prisoners of the Ghostland is “The wildest film I’ve ever made.” While I personally think that distinction still belongs to Mandy, this one certainly fits right in among all the other made-to-order cult flicks he’s been cranking out for the past decade. So I suppose his quote is a more effective ringing endorsement than anything a critic would have to say.

Prisoners of the Ghostland is indeed bizarre, almost self-consciously so. Cage’s character - simply referred to as ‘Hero’ - is a convicted criminal who’s recruited by the tyrannical Governor of Samurai Town to venture into a desolated, radioactive region known as Ghostland and rescue Bernice (Sofia Boutella), whom he claims is one of his granddaughters. If Hero returns, he’ll get a full pardon. If not, the explosives on the suit he’s wearing will start blowing off body parts.

In Ghostland, Bernice has fallen-in with a bizarre cult who are trapped there by a band of undead convicts led by Hero’s former partner-in-crime, Psycho (Nick Cassavettes). Since it’s later revealed all the girls The Governor (Bill Moseley) calls granddaughter are just his sex slaves, you don’t need to be Einstein to figure out where the story’s going. In addition to escaping Ghosttown, Hero and Bernice must also contend with The Governor’s band of samurai henchmen.

Storywise, this sci-fi/western hybrid certainly throws everything at the wall to see what sticks - some does, some doesn’t - and Cage once again goes all-in with yet another over-the-top performance. However, the attempts at outrageousness often feel too calculated, almost like everything was tailored for Cage’s unique brand of bombast. But because he’s already done so many of these types of films, outrageousness is now an expectation.

So despite the Mad Max on acid premise, bizarre characters and overall flamboyance, Prisoners of the Ghostland ends up being surprisingly predictable, mostly due to the participation of its star. The film certainly has its moments and is sometimes quite funny. But in the end, it simply repackages Nicolas Cage’s usual schtick, topped with a shiny new bow.

FEATURETTE - “The Making of Prisoners of the Ghostland”