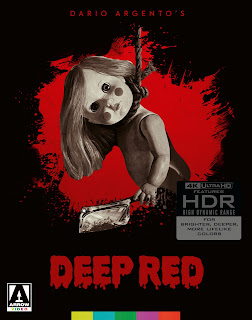 When I first watched Deep Red on video over 30 years ago, I thought it totally sucked...bad dubbing, choppy editing and little of the stylized bloodshed that made Dario Argento’s Suspiria such weird-ass fun. It played more like a Lucio Fulci film and I considered rage-quitting every ten minutes or so.

Though I didn't know it at the time, what I saw was the truncated, full-screen, English version on VHS, with over twenty minutes shaved from its original length. It meant, of course, that I hadn't really seen Deep Red at all.

Then Arrow released the original 127 minute version on Blu-ray a few years ago...in glorious widescreen with a great restoration and the original Italian audio track. For me, watching it was revelatory. Vivid, colorful and sonically thrilling, even the infamous murder sequences were grotesquely beautiful. It’s now my favorite Argento film and you can read more of my gushing about that Blu-ray release HERE.

Now it’s available as a 4K UHD boxed set. Considering the picture and sound of the recent Blu-ray were already pretty damn good, the film looks even better on 4K, with richer color (especially red, of course), deep blacks and a lot more noticeable details. The audio, however, remains the same as the Blu-ray.

Even if technical specs are of secondary importance, the extra bells & whistles may be an even greater reason to upgrade. First, both the original and butchered export versions are included, and it’s pretty interesting to see just how badly the film was once sliced-up (which greatly contributed to my initial negative impression). There’s also a huge selection of bonus features, some carried over from previous releases (including the 2018 Blu-ray), as well as a generous amount of previously unreleased material.

But my favorite aspect of Arrow’s Limited Edition releases has always been aesthetic. This is another great looking boxed set featuring new and original artwork. There’s also another meaty 58 page book, lobby card replicas and a two-sided poster. Put all this together and you’ve got the ultimate release of the ultimate giallo film.

“DEEP INTO THE RED” - An hour’s worth of interviews with director Dario Argento and actor Daria Nicolodi.

“I AM THE SCREAMING CHILD” - Interview with actor Jacopo Mariani (Young Carlo).

TWO-SIDED POSTER - Features the Italian title (Profondo Rosso), with new & original artwork (we kinda like the minimalism of the original).

Thank you of the correction.