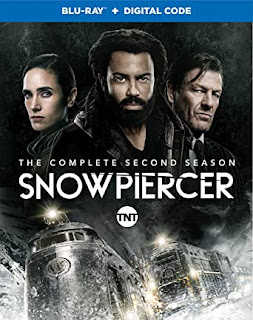 Review by Carl, the Couch Potato😹

I was initially skeptical of the idea to adapt Bong Joon-ho’s Snowpiercer as a weekly series. The concept - to say nothing of the narrative limitations inherent in such a setting - didn’t seem to lend itself to series television...no matter how big and diverse they made the train.

But Season One turned out to be great, a soft reboot with a couple of story arcs and multiple major characters spread out over 10 tension-filled, binge-worthy episodes. It came to a satisfying conclusion, but like most serialized series, capped things off by dropping a whopper of a cliffhanger laying the groundwork for Season Two. Still, I was dubious that they could mine an entire second season out of this.

Fortunately, Season Two is just as compelling, but be advised that seeing all of Season One beforehand is absolutely essential. Picking up right where the last episode left off, this train doesn’t slow down for new passengers (so to speak). Even those who did catch the first season might want to check-out the brief recap - among the bonus features - before climbing back onboard.

This time, the primary story immediately kicks into gear with the arrival of Mr. Wilford (Sean Bean, Season Two’s MVP), the genius who designed Snowpiercer in the first place. Commanding his own train - Big Alice - he and his crew hook-up to the rear of Snowpiercer with the intention of regaining control. His presence threatens the uneasy alliance between the class sections of Snowpiercer, despite Layton’s (Daveed Diggs) efforts to instill democracy. Even after revealing himself to be a narcissistic, power-mad and mentally unstable tyrant, a lot of the population still blindly worship him.

Sound familiar? One of the more intriguing aspects of the story are the obvious parallels between Wilford and a certain former leader who’ll remain unnamed, as well as the zealous adoration he craves (and inexplicably still gets). Like that former leader, Wilford makes no attempt to hide his self-serving agenda, not-only denying Melanie’s (Jennifer Connelly) scientific evidence that Earth might be warming back up, but going so far as to sabotage her efforts to verify it...all so he can rule over everyone on the train.

But it’s not all allegory. In addition to further developing many returning characters, some interesting new ones are introduced, such as Alex, Melanie’s estranged teenage daughter who Wilford trained as Big Alice's engineer (she still resents Mom for abandoning her years earlier). This relationship is the springboard for a particularly intriguing episode, the only one that takes place outside of the train; presented in revealing flashbacks, we learn why Melanie “stole” Snowpiercer and witness the extent of Wilford’s apathetic cruelty.

Not only does Season Two of Snowpiercer plow full speed ahead, the narrative expands its characters and features a story that’s just as gripping as Season One’s (though the social commentary is far less subtle). Like before, things are brought to a gratifying conclusion while leaving the door wide open. Can they get another season or two out of the premise without becoming rote? I’m starting to think so.