MIDDLE-EARTH ULTIMATE COLLECTOR'S EDITION: One Set to Rule Them All 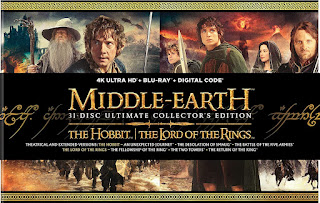 The Middle-Earth Ultimate Collector’s Edition is aptly named. It contains the theatrical and extended versions of each film in the Lord of the Rings and Hobbit trilogies. Not only that, all six films are offered in both 4K UHD and Blu-ray formats (as well as digital codes for both versions of each). They’re packaged sequentially in individual cases & slipcovers (with new artwork), meaning The Hobbit makes up volumes I-III and The Lord of the Rings, volumes IV-VI.

Each volume contains multiple discs dedicated to a single film. The Hobbit: An Unexpected Journey, The Hobbit: The Desolation of Smaug and The Hobbit: The Battle of the Five Armies have four discs each. Speaking of The Hobbit, it wasn’t until reviewing this set that I realized the extended version of The Battle of the Five Armies is actually rated R, which might make it the first R-rated film adapted from what’s been historically considered a children’s book. Not that such a rating makes it a better film. The entire Hobbit trilogy has always been hampered by the questionable decision to adapt a 300 page novel into three epic length films, a narrative liability that is exacerbated by the extended versions. Still, it’s here if you want it.

...as are a few new bells & whistles. Included is a 64-page booklet and collectible porter art cards (outlined below), but the best new feature is a Blu-ray disc containing previously unavailable material. For the 20th Anniversary of The Lord of the Rings, Tolkien superfan Stephen Colbert hosts three virtual cast reunions. Running 30-40 minutes apiece, these Q&A sessions include most of the primary cast, as well as director Peter Jackson, who all provide a wealth of entertaining anecdotes.

Everything’s packaged in a massive, heavy - don’t drop this on your foot - and impressively designed fold-out box that securely holds each case and stays closed magnetically. Outside, gold embossing borders a collage of images from every film; inside, the Ring of Power’s inscription is displayed (also in gold). All of which means this ain’t the kind of boxed set you stick on the shelf with your other discs...you display it proudly to say, “Hey, look what I’ve got!”

But as big as it is, I don’t think this set is intended for the superfans who’ve already purchased the films in every format. They’ve already been available in 4K - separately and as trilogies - for some time now, the video and audio quality being as sharp, detailed and rich as home video gets. And other than audio commentaries, no bonus features from previous releases are carried over to this set. Unless aesthetics are your thing, some lovers of all things Middle-Earth might find this set a bit too pricey for what amounts to two-hours of bonus material.

The Middle-Earth Ultimate Collector’s Edition is exactly that...a beautiful set intended for collectors to commemorate the anniversary of a landmark franchise (well, a landmark franchise and The Hobbit trilogy). As such, it’s highly recommended. I’d even extended that recommendation to anyone simply thinking of a 4K upgrade. I did the math and, considering you get both versions of all six films in three formats, this set is actually cheaper than buying them separately. You’re welcome.

7 TRAVEL POSTER ART CARDS - Featuring colorful minimalist artwork on one side, a location photo and descriptions on the other. One for each film, plus a Middle-Earth Rivendell card.

ARCHIVAL AUDIO COMMENTARIES - Loads of commentaries for each film, all carried over from previous editions (Blu-ray Only).