LEGENDS OF TOMORROW: THE COMPLETE SIXTH SEASON: Experience Preferred, But Not Required 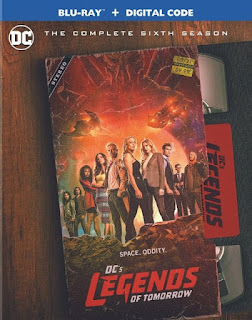 One of the big drawbacks of many serialized television shows - especially after they’ve been airing for a while - is the continued expectation of commitment on the viewer’s part. And as for curious newcomers...well, good luck digging into a new season without having seen all the others. Sure, you could use your Google Fu to dig-up some recaps, but what’s the fun in that?

However, the good ones do compel you to go back to see what you’ve been missing, which Season Six of Legends of Tomorrow does. Not necessarily to bring you up to speed on the new story arc (which was apparently established during Season Five’s last episode), but because this amusing, eclectic team of time travelers are interesting enough that we’re intrigued about their pasts, which are sometimes important to the narrative.

That aforementioned story arc - the Legends’ search for Sara (Caty Lota), who was abducted by aliens - is merely perfunctory. It isn’t the hunt for Sara that matters, but how they’re looking for her, with various team members travelling back and forth in time to different years, hoping to capture Earth-bound aliens who might know her whereabouts. For the most part, each episode has them visiting a specific era, sometimes with funny results and occasionally making things worse by putting humankind in peril (such as an ill-conceived visit to 1962 during the Bay of Pigs).

It’s these side stories that make the show fun, since the individual episodes - each with great attention to period detail - are entertaining enough out of context. And even with limited knowledge of their pasts, certain characters endear themselves to us pretty quickly. As someone new to the show, my favorites were Matt Ryan’s take on demon hunter John Constantine, and Dominic Purcell as Rory, a perpetually drunk meathead who’d rather solve everything with violence.

While Season Six of Legends of Tomorrow certainly relies on longtime viewer commitment, at least it isn’t required. Most of these 16 episodes are engaging enough that newcomers might still get a kick of them. That’s always the sign of a good show.