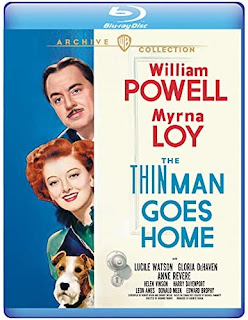 Five down, one to go…

Though it might have been preferable to get them all at once, fans of The Thin Man film series have to be pleased. The first film was released on Blu-ray a few years ago, but in 2021, Warner Archive has been committed to putting out another one - in sequence - every couple of months or so.

The fifth film, The Thin Man Goes Home, isn’t quite on par with the previous entries, which might be partially due to new director Richard Thorpe replacing W.S. Van Dyke, who helmed the first four films but had since passed away. With all due respect to Mr. Thorpe’s respectable career, Van Dykw had a defter touch and a better feel for the characters.

Not that The Thin Man Goes Home isn’t good. It’s another wonderful blend of crime & comedy featuring Hollywood’s greatest husband-wife detective team, Nick & Nora Charles (William Powell & Myrna Loy). This time, they're visiting Nick’s parents in the small town of Sycamore Springs to vacation and celebrate his birthday. But after a local artist is murdered - one of his paintings is sought by a variety of potential suspects - Nick’s forced to make it a working vacation.

Nick’s also trying to impress his father, who never truly approved of his career choice or his drinking, the latter of which Nick swears off during the visit. One of the more amusing running gags is Nick getting into predicaments where Dad thinks he’s plastered. We also meet a lot of Nick’s old friends, some of whom Nora doesn’t approve of, which is also good for a few laughs. As usual, the story is perfunctory, though this film spends more time on the actual case than earlier ones, meaning there’s less of Nick & Nora’s amusing banter than usual. Still, their natural chemistry shines through...and Asta's as charming as ever.

Though not quite as consistently clever - the humor’s a bit broader, the side characters a little less interesting - The Thin Man Goes Home is another solid entry in the beloved film series. And how often can you say that about the fifth film of a franchise?