THE EMPEROR'S SWORD Slows Things Down 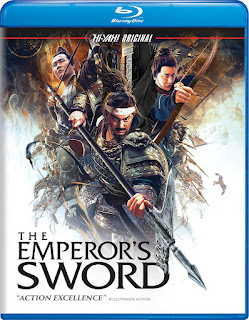 I was roughly seven minutes into The Emperor’s Sword when I thought to myself, enough with the slow-motion, already!

The opening action sequence is loaded with so much slow-motion - often pointlessly applied mid-shot - that it becomes distracting. Though somewhat relieved when the things settled down to focus on the story itself, I had an ominous suspicion that all of the action was going to be depicted like this.

Sure enough, every clashing sword, thrown punch, flying body and cautionary glance is an exercise in slow-motion overkill (frequently accompanied by terrible CGI). But the stylistic chest-thumping would be forgivable if the story and characters were at least engaging.

However, The Emperor’s Sword takes a narrative path we’ve seen plenty of times before. Meng Xue, the last surviving daughter of a Chinese general, is entrusted to keep his sword out of the hands of an evil emperor, Lord Zhao, who apparently needs it to rule all of China. But it’s never made clear what tactical advantage possessing the sword will give him, especially since he and his underlings don’t appear to have much problem mowing down anyone opposing them.

At first, we’re led to assume that Jillian - one of the ‘Seven Gentlemen’ who served under the former emperor - is the main protagonist, being that he rescues Meng Xue in the opening scene. But then he disappears for much of the middle act, where several other characters are introduced, some who assist Meng Xue, others trying to kill her and take the sword. While there’s eventually some interesting developments in the relationship between Jillan and Tian, another former ‘Gentleman’ now serving Zhao, most of the others come and go within a few scenes.

Considering the plot and characters are perfunctory, what’s really surprising is the frequent downtime between action scenes...lengthy stretches of symbolism and lyrical dialogue that seem manufactured to create an unwelcome sense of seriousness to the proceedings. The end result is a film that’s overly episodic and narratively choppy. Despite director Zhang Yingli’s attempts to punch things up with visual fireworks, the climactic showdown is hardly worth the patience required to endure such a convoluted plot.

The fight scenes are competent and decently choreographed, though certainly not dynamic enough to justify repeatedly lingering on them in slow-motion. In fact, I’d be willing to wager the entire film could’ve been a good ten minutes shorter by simply keeping the cameras rolling at normal speed. Since the story itself is nothing to write home about, it would sure save the viewer some time.