THE CHINESE BOXER: Context is Everything 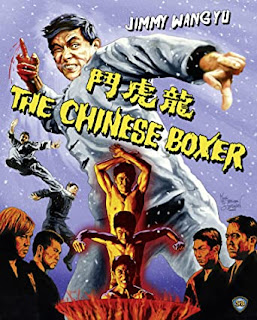 Though well aware that the martial arts genre didn’t begin with Enter the Dragon, I’ve never actually seen any Shaw Brothers Studios earlier action films until now. After watching The Chinese Boxer (aka The Hammer of God), one thing is certain: Context is everything.

Writer-director-star Jimmy Wang Yu plays Lei Ming, a protege of Master Li (Mien Fang), who operates a respected kung fu school. Then Diao (Hsiung Chao) blows back into town with a gang of Japanese karate masters, including Kitashima (Lief Lo), who’s as sadistic as he is lethal. Together, they kill Master Li and most of the students, leaving Lei Ming for dead.

He’s nursed back to health by fiance Li Shao-ling, during which time Diao and Kitashima set-up a crooked casino business while extorting the locals. Vowing to avenge his master’s death and free the townspeople of their tyranny, Lei trains himself in combined martial arts techniques to take them on. The second half of the film has him dispatching thugs and samurai mercenaries before a final showdown with Kitashima.

Crude, bloody and simply plotted, the film may seem quaint compared to what the likes of Bruce Lee and Jackie Chan would later bring to the screen. However, viewed in the context of when it was made, it’s influence is undeniable. Jimmy Wang Yu isn’t what anyone would mistake for a great actor, but he’s definitely got skills, which are displayed in abundance with well-choreographed - occasionally outrageous - action scenes. And one can easily see how the sequence where Lei wastes dozens of casino henchmen inspired Quentin Tarantino to mount something similar for Kill Bill, Vol. 1.

With vicious villains, an incorruptible hero and plenty of blood-spurting brawls, The Chinese Boxer may not be high art, but it’s a hell of a lot of fun. In addition to a nice restoration, this Blu-ray from 88 Films throws in a batch of interesting bonus features which contextualize its historical importance on the martial arts genre.

“WONG CHING AT SHAW” - Wong Ching is an actor who worked in many Shaw Bros films, including The Chinese Boxer.