THE LAST OF SHEILA and the Coburn Cruise 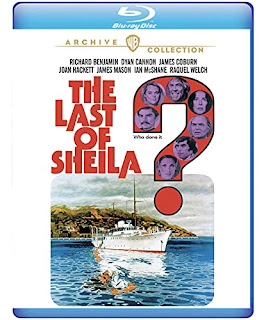 There was always something about James Coburn’s on-screen demeanor that displayed congenial arrogance, like his character knew something the others didn’t and often appeared a step or two ahead of them. What better guy to play Clinton Greene, a megalomaniacal movie producer with an axe to grind?

Greene’s wife, Sheila, died a year earlier, the victim of a hit & run. Presently, he invites an eclectic assortment of Hollywood cohorts to spend a week on his yacht for a series of scavenger hunt-type games. One of them killed Sheila and we suspect Clinton already knows who it is, but appears less concerned with justice than relishing the opportunity to manipulate his guests. Then he dies during one of the games, which is assumed to be an accident until disgruntled screenwriter Tom (Richard Benjamin) explains to the others that the evidence suggests murder.

Despite his hospitality, it’s clear that Greene wasn’t particularly liked by his guests, which include Tom’s wife, Lee (Joan Hackett), has-been director Philip Dexter (James Mason), unscrupulous agent Christine (Dyan Cannon), self-absorbed starlet Alice Wood (Rachel Welch) and her protective husband, Anthony (Ian McShane). All of them have secrets that the game was intended to reveal, which ultimately means everyone has a motive and is therefore a suspect.

Coburn looks like he had a good time making this film, since the role is definitely conducive to his style. His enthusiasm is infectious, so it’s sort of a shame that his character is out of the picture halfway through. Still, what’s left is a fairly interesting whodunit with an impressive ensemble cast going through the process of weeding out the killer...or killers, since whoever did Sheila may not necessarily be the same person who offed Clinton.

Despite the notable cast and director (Herbert Ross), The Last of Sheila is a relatively obscure relic from the early ‘70s. Aesthetically, the film is definitely a product of its time and the Blu-ray transfer is nothing to write home about, but the story by Anthony Perkins & Stephen Sondheim is engaging and unpredictable enough to make it worth checking out.