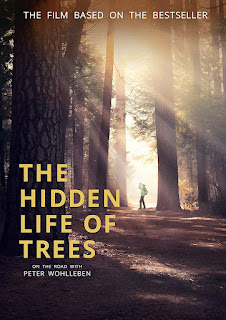 My wife used to read a lot of sci-fi & fantasy, and one time she mentioned an Anne McCaffrey story about these people who went to colonize another planet, where they’d chop down trees to use as lumber and firewood. However, it turned out the trees were the dominant sentient life-form in this world and soon brought the colonists to justice…

...or something like that. I could be remembering the story wrong. The point is it got me thinking how unnerving it would be if trees were indeed feeling, sentient beings. After everything humankind has subjected them to over the centuries, who’d blame them for going all Charles Bronson on us?

The documentary, The Hidden Life of Trees, suggests that very thing. Not that they’ll someday get even, but that trees have their own way of thinking, feeling, socializing, cooperative living and defending themselves. As suggested by forester Peter Wohlleben - on whose book the film is based - many of these facts and theories are interesting, even charming in how the voiceover narration personifies their behavior.

However, much of the film is also about what we’re doing to them, inadvertently or otherwise. Not only that, Wohlleben insists even our efforts at reforestation are misguided, ultimately doing future generations of trees more harm than good. With our overall indifference to adopting the alternate methods he suggests, a sense of hopelessness permeates the film. And viewed in the context of trees as sentient creatures, the scenes of automated logging - performed by faceless robotic machines - flirt with being horrific. Talk about your chainsaw massacres!

It ain’t all doom and gloom, though. We meet the world’s oldest tree, which is nearly 10,000 years old. And when focusing on tree behavior - protecting each other, working cooperatively with other species, etc. - the film is pretty interesting, particularly the use of time-lapse photography. But with all due respect for Mr. Wohlleben and his noble efforts (no pun intended), he ain’t the most dynamic screen personality on Earth. The sequences where he’s giving presentations and guided tours are about as interesting as...well, watching trees grow.

Still, The Hidden Life of Trees is worthwhile and more visually interesting than one might think. It’s not always the most uplifting experience, which is perhaps part of the point. One thing is certain...you’ll think twice before indiscriminately trimming that big old spruce in your backyard.